She is the candidate of the country's largest opposition party: 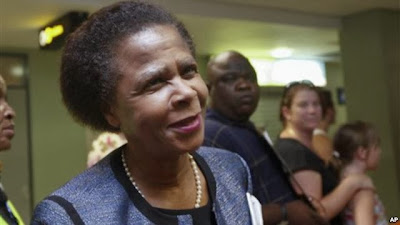 South Africa’s main opposition party – the Democratic Alliance – will run a black woman as its presidential candidate. Elections are expected in April, but President Jacob Zuma has not set a date yet.

The DA has chosen Dr. Mamphela Ramphele, former companion of the late activist Steve Biko. She is also a former World Bank managing director and University of Cape Town vice-chancellor.

Independent South African analyst Delia Robertson said, “Mamphela Ramphele is a longtime political activist. She was a member of the African National Congress. She’s a medical doctor. She was involved in politics at a very young age during the apartheid years…and that is how she met Steve Biko, who was murdered by the police during his detention without trial many years ago.”

The couple had two sons together, but never married.

“Opposition politics in this country is a very difficult space to be in, mostly because of funding limitations,” said Robertson, adding that “Helen Zille, the leader of the Democratic Alliance, realized that she had an opportunity to get somebody of Ms. Ramphele’s caliber.”

Robertson said that Ramphele is a “good addition” to the DA. The party has its roots in opposition politics during apartheid. When the former ruling National Party folded, many of its members joined the DA giving it a boost in both parliament and credibility. The DA controls the Western Province and Cape Town and hopes to make strong inroads this year in the Johannesburg/Pretoria area. But the Democratic Alliance remains a party with mainly white leadership.

“They’re getting more and moreblack members,” said Robertson, “They have expended into the black community, but not enough. It’s 20 years since the end of apartheid. And for a party to be so top heavy in white leadership at this stage of our democracy is hard to justify morally, I think, for many potential voters…So getting somebody of Dr. Ramphele’s caliber is going to be important for them.” [...]

Dr. Ramphele is an interesting candidate. I wonder what her chances are of winning? If you follow the link, the page has a link to an interview with South African analyst Delia Robertson.

I read your updates - didn't realise you are so interested in SA?

Oh yes. Ever since I visited there, I've tried to keep up with the news and what's going on there.