Oh, wait a minute! They can:


A NASA probe orbiting the moon is broadcasting live cosmic tunes from a computer near you.

NASA's Lunar Reconnaissance Orbiter (LRO) has a new internet radio station for people who want to check out space weather through music. Operating in real time — as long as the craft isn't behind the moon — the station plays music that changes in pitch and instrument based on how much radiation the spacecraft experiences.

"Our minds love music, so this offers a pleasurable way to interface with the data," project leader Mary Quinn of the University of New Hampshire, Durham, said in a statement. "It also provides accessibility for people with visual impairment." 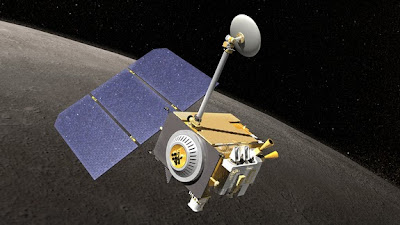 Cloudy, with a chance of B-flat

Launched in 2009, LRO orbits the moon as it maps its surface. The craft carries with it a Cosmic Ray Telescope for the Effects of Radiation, or CRaTER. Six detectors on the instrument measure the radiation from solar activity and galactic cosmic rays.

The detectors measure how many energetic particles are registered each second and sends the information to CRaTER Live Radio, where software converts the measurements into pitches in a four-octave scale. Six pitches are played each second — one for each detector. Low pitches indicate high activity, while higher pitches indicate lower counts.

During the course of a significant solar event such as a solar flare, radiation activity may exceed the normal operating range. In such a case, the software creates a second operating range with the piano at the bottom and banjo at the top, but the background violin and cello scales. A drop in pitch for the background instruments indicates a move to the secondary range.

LRO broadcasts 24 hours, and is live at all times except when the craft travels behind the moon. During this blackout period, the station reuses the previous hour's activity, changing the sound of the background bongo drum and muting the chiming triangle.

The process, known as sonofication, converts data into sound and has been utilized in a number of fields on a variety of missions, including Voyager 1, Voyager 2 and Kepler. [...]

The actual website you can listen to it on live, is here:

Give the page a minute or two to load. In the upper left hand corner is a sound bar that controls the music, it should start playing automatically. The site has a lot of detailed information about how it all works.

I've checked it out a few times. The "Music" is probably more ambient than musical, though it can vary a considerable degree, depending on the space weather. Sometimes it sounds more pleasant than others.

Here's a radio astronomer who's been making music from radio telescope signals for 2 or 3 decades:

I heard some of her music Way Back When. Now she's Professor of Physics and Astronomy at Florida International University.