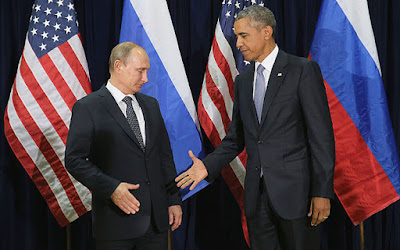 Those are the diplomatic euphemisms Vladimir Putin used to describe his meeting with Barack Obama on Monday night, and it says a lot about the dire state of US-Russian relations that they sounded positive.

But it also says a lot about the awkward personal dynamic between Mr Putin and Mr Obama. For no matter what their spin doctors say, there can rarely have been two world leaders so obviously physically uncomfortable in one another’s presence.

It is not even like the geopolitical relationship between their two countries, a previously perfectly workable if strained partnership until it fell apart with the Ukraine crisis. To put it diplomatically, Mr Obama and Mr Putin have just never quite "gelled"....

Maybe there is a basis for understanding. Undisguised mutual dislike, frank disagreement on Ukraine, and a business-like recognition that it is much safer to argue about Syria than do anything about it.

And maybe Mr Putin is not wrong. After all, a frank discussion of interests and demands is a decent starting point for a deal, even on a problem as intractable as Syria. Perhaps Monday's meeting was, in some sense, constructive after all. [...]


The US has withdrawn troops from the Middle East, and failed to support Syrian Rebels in any meaningful way. That left a vacuum, and Russia is filling it. Putin knows nobody has the will to help the rebels. Russia is allied with Syria and Iran. Putin is doing this because... he can.

So if we aren't going to fight it, do we work with it? Some say that Russia is not the enemy. Even if that is true, they are not automatically our friends, either. Perhaps they are our "Frenemy". America has lots of those, and we work with them from time to time. Will this be one of those times? Should it be? I couldn't say if it should. I think it may become one of those times by default, simply because no one is willing to do anything else. At any rate, we shall see.