Another good article from the Brussels Journal blog, is about "honor" killings of Muslim women in Europe, and a recent case in Denmark: 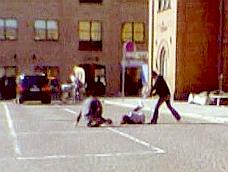 This week, for the very first time, a court in Europe sentenced nine members of the same family for the honour killing of a female relative. Honour killings, where a woman is murdered for the shame that she is said to have brought on her family, are a growing phenomenon in Western Europe...

...Last Tuesday in Denmark, however, a jury of the Østre Landsret ruled that not only the man who pulled the trigger was guilty, but every family member who collaborated in “punishing” Ghazala Khan, an 18-year old Danish-born woman of Pakistani origin, who was shot by her brother, 30-year old Akhtar Abbas, on 23 September 2005, two days after her marriage.

Ghazala had married an Afghan man, 27-year old Emal Khan, against the wishes of her father. An aunt, the youngest sister of Ghazala’s mother, who had told the young couple that she would try to reconcile them with her family, asked them to come to Slagelse train station. Her brother Akhtar shot her dead in front of the station and wounded Emal Khan, who survived the murder attempt.

On Wednesday a Danish judge sentenced Akhtar Abbas to 16 years in gaol, and the father, 57-year old Ghulam Abbas, to life imprisonment (which, if one behaves well in gaol, is reduced to 16 years). The aunt and two uncles were given 16 years as well. Other members of the family and friends who had helped to track down Ghazala received sentences of between 8 and 16 years. Two Pakistanis who do not have the Danish nationality will be expelled from Denmark after serving their prison term.

The Danish verdict is historic, not only because the entire clan was punished but also because the head of the family, who ordered the killing, was given a heavier sentence than the actual murderer...

(bold emphasis mine) The full article has many embedded links. One of those links is to a case in Germany, of a murdered Turkish women named Hatin Surucu. Here is her photo, and a link to the article from Der Spiegel: 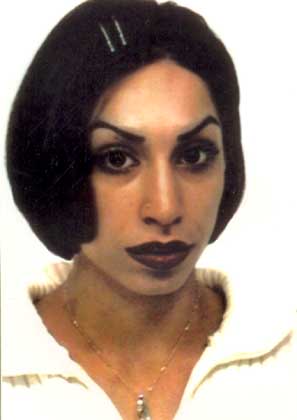 THE DEATH OF A MUSLIM WOMAN
"The Whore Lived Like a German"   An excerpt:

...The shots came from nowhere and within minutes the young Turkish mother standing at the Berlin bus stop was dead. A telephone call from a relative had brought her to this cold, unforgiving place. She thought she would only be gone for a few minutes and wore a light jacket in the freezing February wind. She had left her five-year-old son asleep in his bed. He awoke looking for his mother, who, like many Turkish women in Germany, harbored a secret life of fear, courage and, ultimately, grief. Now her little boy has his own tragedy to bear: His mother, Hatin Surucu, was not the victim of random violence, but likely died at the hands of her own family in what is known as an "honor killing."

Hatin's crime, it appears, was the desire to lead a normal life in her family's adopted land. The vivacious 23-year-old beauty, who was raised in Berlin, divorced the Turkish cousin she was forced to marry at age 16. She also discarded her Islamic head scarf, enrolled in a technical school where she was training to become an electrician and began dating German men. For her family, such behavior represented the ultimate shame -- the embrace of "corrupt" Western ways. Days after the crime, police arrested her three brothers, ages 25, 24 and 18. The youngest of the three allegedly bragged to his girlfriend about the Feb. 7 killing. At her funeral, Hakin's Turkish-Kurdish parents draped their only daughter's casket in verses from the Koran and buried her according to Muslim tradition. Absent of course, were the brothers, who were in jail.

The crime might be easier to digest if it had been an archaic anomaly, but five other Muslim women have been murdered in Berlin during the past four months by their husbands or partners for besmirching the family's Muslim honor. Two of them were stabbed to death in front of their young children, one was shot, one strangled and a fifth drowned. It seems hard to fathom, but in the middle of democratic Western Europe -- in Germany, a nation where pacifism is almost a universal mantra -- murderous macho patriotism not only exists but also appears to be thriving. It may even be Germany's liberalism -- and its post World War II fear of criticizing minority cultures -- that has encouraged ultra-religious families to settle here...

(bold emphasis mine) The story is just tragic... and all too common. Other links in the Brussels Journal article show that in Great Britian, as many as 100 cases of suspected Honor Killings are under investigation.

A religion that can survive only by killing people who leave it, needs to be reformed or destroyed. The last thing we need is a lot of Multi-Culti clap-trap and moral-relativism about how all cultures are equal and need to be respected. How much respect did these murdered women get?

The Spiegel article has a lot more information, photos and stories about other Mulsim women, it's a great resource on this topic.

...Rushdie told German weekly magazine Stern that his latest novel, "Shalimar the Clown," dealt with the deep anxiety felt among many Islamic men about female sexual freedom and lost honor.

When asked if the book drew a link between "Islamic terror and damaged male honor," Rushdie said he saw it as a crucial, and often overlooked, point. "The Western- Christian world view deals with the issues of guilt and salvation, a concept that is completely unimportant in the East because there is no original sin and no savior," the author said, in comments printed in German.

"Instead, great importance is given to 'honor.' I consider that to be problematic. But of course it is underestimated how many Islamists consciously or unconsciously attempt to restore lost honor."

(bold emphais mine) This is a topic I have seen come up again and again. I think that in the West, we fail to understand just how important this is. 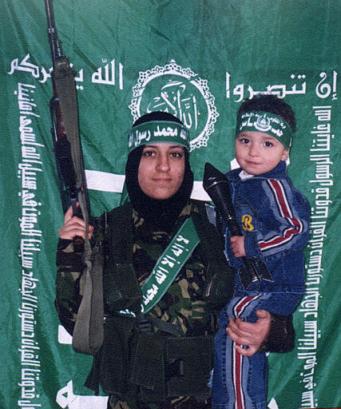 Look at this woman's eyes, then read her story. Did she WANT to die as a martyr, or was she entrapped, manipulated and coerced?

Palestinian Rheim Al-Riyashia, a mother with young children, blew herself up in a suicide bomber attack. When you look at the details of her situation, I think it's quite possible she was facing death by "honor killing" for committing adultery, and was given a choice; death with shame (honor killing), or death with glory (martyr), and a large financial payment to her husband and children. Some excerpts:

...Al-Riyashi was not poor and, before her marriage, not particularly religious. She came from a prosperous family and lived comfortably with her husband and two children. There had been some sort of quarrel among her family before the attack, and rumors have circulated that she was actually moved to murder-suicide because she had committed adultery...

...IDF sources said that the investigation has already revealed that Al-Riyashi's husband, an activist in the HAMAS organization, not only knew about his wife's plans in advance, but even encouraged her to carry out the homicide attack. And that the person who recruited Rheim to carry out the homicide attack and equipped her with the explosive belt was none other than the lover with whom she cheated on her husband. The Sunday Times (London) reported that the husband drove his wife to Erez Crossing...

...Sources said Riyashi was forced into such a terrible act because she had brought shame on her family by cheating on her husband. So-called honor killings are common among the more conservative elements of Arab societies. In the event of rape, adultery, or other serious indiscretion, the woman's male relatives will kill her to restore the family honor. Some jails in Jordan are full of women, who having committed no crime, hiding from the probability of being killed for a slight, real or imagined, to the family honor.

In the present situation becoming a suicide bomber allows family honor to be restored and supplies recruits for politically and psychologically effective actions...

Was she "set up" by her husband and the Hamas recruiter? Her parents and siblings did not approve of her death and the way she was used.

The notion of honor among Muslims is an important factor in our dealings with Islam that should be further scrutinized.
Posted by Chas at 9:50 AM

Chas, have you heard of any such thing in the US?

With the media conspiracy to hide all Muslim crimes, I doubt we would hear about it and certainly not see a digest of such crimes.

Yes, there have been some cases. There was this one in New York state:

I think it may not be as prevelant in the US, because our Muslim population is smaller. But sometimes the killings are made to look like other kinds of crimes, so it's hard to say. I haven't found any definite statistics about US cases. It's an interesting question. I expect our MSM would ignore it, except for local papers. I think perhaps it was ignored in Europe for a long time, but as it happens more and more it has become impossible to ignore.

It is cute the way you try and use your imagination and creativity to create an Attack of a Muslim Woman motivated on defending her people to her committing adultery thats so cute. And referring to Honor Killings I suggest you keep your thaughts to yourself and stick your nose out of our Business Leave our community to us and Look after your own. It is funny that you have transformed the Protection of a woman's honor her chastity and modesty etcetc. into a crime but the degradation of Females Normal. Even though i dont agree fully with most Honor Killings that happen you dont need to comment about it leave it for us. The Honor Killings which i do approve of and support is the ones that happen in South Lebanon and parts of Syria for example one case when a girl runs away with a Non-Muslims and they start having Pre-Marital Sex the Males of the family take the Boyfriends life to stop the situation from proceeding,setting an example to others and Defending their honor as for the Girl they take her back home and Teach her nicely why it is wrong, how precious she is to them and islam etcetc. and never give up until they die to look after their daughter/sister.

If only it were my imagination. We could ask the dead women involved but, oh yeah, they're dead.

If Muslims like yourself wish to be left alone, to have your actions unexamined and uncriticized, you would do well to stay in backward Muslim countries where such actions are considered normal.

But when you immigrate to Western countries and try to bring your 7th century laws with you, it's not just "your business" anymore.

Your ideas of a woman's chastity, honor, modesty, etc. are far different from what a Westerner means by the same terms, and for that I make no apologies.

What you call "nice" is too cold blooded for me. We live in different worlds, and they obviously are not compatible. No Westerner who values his culture shall ever be silent on that issue, especially when you try to bring your world into ours.