What can we do with a country like Iran? LOTS. 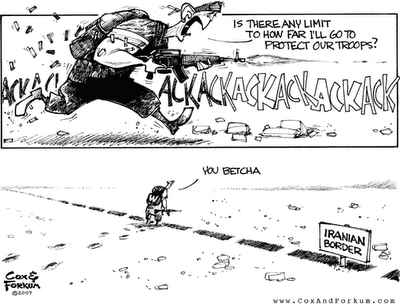 (You can read Cox & Forkum's related commentary and links HERE.)

In so many ways, terrorist troubles in the Middle East and around the world lead ultimately back to Iran. Yet in so many ways, we seem helpless to do anything about it. The Western World is afraid to bomb Iran; chaos of all sorts would likely ensue, and the world price of oil would probably rise drastically. The U.S. has no will to invade Iran, since we have our hands full with Afghanistan and Iraq. Is there nothing we can do?

Actually, there is quite a bit we CAN do, other than a military strike, according to Victor Davis Hanson, in his latest article:

[...] Imagine that Iran is a hardboiled egg with a thin shell. We should tap it lightly wherever we can - until tiny fissures join and shatter the shell.

We can begin to do this by pushing international accords and doggedly ratcheting up the weak United Nations sanctions. Even if they don't do much to Iran in any significant way, the resolutions seem to enrage Ahmadinejad. And when he rages at the United Nations, he only loses further support, especially in the Third World.

We should start another fissure by prodding the European Union, presently Iran's chief trading partner, to be more vocal and resolute in pressuring Iran. The so-called EU3 - Britain, France and Germany - failed completely to stop Iran's nuclear proliferation. But out of that setback came a growing realization among Europeans that a nuclear-tipped missile from theocratic Iran could soon hit Europe just as easily as it could Israel. Now Europeans should adopt a complete trade embargo to prevent Iranian access to precision machinery and high technology otherwise unobtainable from mischievous Russia and China.

Americans should continue to support Iranian dissidents. We need not encourage dissidents to go into the street, where they could be shot. Instead we can offer them media help and access to the West. Americans can highlight the plight of women, minorities and liberals in Iran - just the groups that so appeal to the elite Western left.

The United States also must stabilize Iraq and Afghanistan. The last thing Iran wants is a democratic and prosperous Middle East surrounding its borders. The televised sight of Afghans, Iraqis, Kurds, Lebanese and Turks voting and speaking freely could galvanize Iranian popular opinion that in time might overwhelm the mullahs. [...]

(bold emphasis mine) I can't print the whole thing, but it's just chock full of good ideas. We must remember that we actually have allies inside of Iran. There are forces inside Iran, even among the ruling mullahs, that want Ahmadinejad out. And if we do all we can to become more energy independent, and bring about a drop in the price of oil... what do you think will happen in Iran? Do read the whole article, it's good stuff!


A Reason to be Optimistic About Islam? 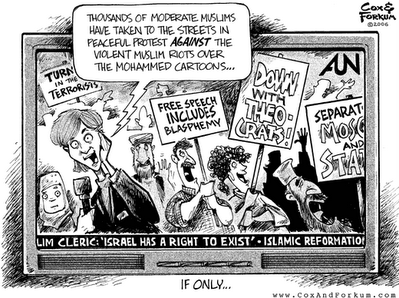 (You can read Cox & Forkum's related commentary and links HERE.)

If only the cartoon where true. But could it be that it's getting closer to reality? There is actually going to be a Secular Islam Summit in St. Petersburg, Fla., on March 4-5. A partial excerpt from Cox & Forkum:

[...] According the chair of the meeting, the rationalist critic of Islam and acclaimed author Ibn Warraq, "What we need now is an Age of Enlightenment in the Islamic world, of the Islamic mind-set or worldview. Without critical examination of Islam, it will remain unassailed in its dogmatic, fanatical, medieval fortress; ossified, totalitarian and intolerant. It will continue to stifle thought, human rights, individuality; originality and truth."

Said one summit delegate, Irshad Manji, author of The Trouble with Islam Today, "This summit is proof positive that reform-minded Muslims are creating a movement. We no longer exist in isolation. Those who hate our message of free thought in Islam will keep trying to pick us off individually, but collectively we're not going anywhere except forward."

(bold emphasis mine) YES! They are going to have some great speakers too, check out the links to find out more.