Will AKP's Gul be Turkey's President? 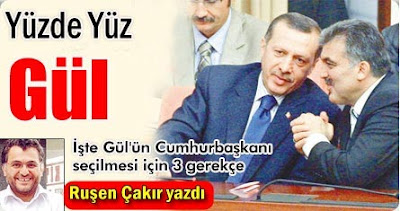 Columnist Rusen Cakir of mainstream Turkish daily Sabah who is well connected with AKP circles, wrote today that the new president will be Gul, with 100% certainty. Cakir argues that despite the views of the mainstream media that reflect the wishes of the 53% of the people that did not vote for AKP in the elections, and their expectation that PM Erdogan will keep his promise to seek compromise on the candidate for president, Gul will soon be declared as the only candidate and will become the next president.

According to Cakir AKP cannot ignore the will of its Islamist base - that will always remain as the party’s core and backbone – despite the illusion of its slide towards the center.

(bold emphasis mine) PM Erdogan and Gul both have wives who obey Sharia law and cover their heads. One point of contention that led to calling of new elections was Erdogan's plan to appoint Gul as president, because of his conservative Islamist views. During the last election Erdogan implied he would choose someone more moderate to fill the presidents position, for the sake of national unity. The AKP won with more votes than any other party, but not a majority of total votes. Everyone now is waiting to see what Erdogan will do.

Supporters of secular government in Turkey fear the Islamist AKP will bring Religion into government and reintroduce "backwardness" as the dominant force in Turkish society and culture.

What is "backwardness"? It could be many things, but the following is a good example: 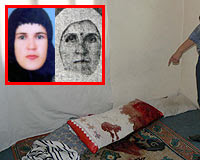 A woman (47) deserted her husband in Kars, in eastern Turkey, and moved in with her divorced daughter (27), mother of three. They were located by the husband/father and his son who came yesterday to the women’s home in Kocaeli, where the 19 year old son brutally killed his mother and his sister by beating them on the head with a bat, with his three young nephews watching.

(bold emphasis mine) Great example for those young nephews to learn by, eh? No wonder the women were fleeing. Imagine what it must have been like living with such men? Such men and their beliefs, that's backwardness.

One can argue that perhaps not all of the AKP members approve of such "honor killings"; Yet there is little doubt that the men who do approve of such practices support the AKP. Is it any wonder why so many Turks are concerned about religion in government overtaking their country?

There are many arguments -some of them compelling- in support of the AKP. They do enjoy support even from outside their core Islamist constituency. But it's the beliefs of that dominant core that have so many worried.

Here is a compilation page showing this and all my other prior posts that talk about or mention Turkey. There are lots of photos from the protests in support of secularism.