"Boat Anchor" is a term used to describe vintage amateur radios, which are often large and bulky. As they were replaced with smaller models, the large and heavy old ones were said to be only good to use as boat anchors. 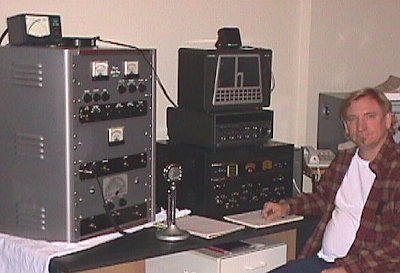 Rock star Joe Walsh (WB6ACU) with some "boat anchors"
But in actual fact, there has been a revived interest in old amateur radio equipment, even the old vacuum tube models. Believe it or not, it's possible to still buy vacuum tubes to keep those old boat anchors going.

Some people believe that vacuum tube radios have a richer, fuller, warmer sound (listen to a sample here). Such radios were still in common use when I was a small child, and I do remember that they had a different sound quality from today's radios.

The "survivalist" type folks value vacuum tube radios, because they are nearly impervious to electromagnetic pulses, which can fry transistorized electronics.

Still others like the radios for purely nostalgic reasons. Tube radios have enjoyed a resurgence, but could the bubble of their growing financial value be about to burst, as nostalgic buyers disappear? The following article asks that very question:

Are Boat Anchor Values in a Bubble?

An eBay auction that recently ended has prompted me to ask the question:

A little background, so you can judge my perspective. I was first licensed in 1965 at the age of 12 during an era where the tube was still “King”, but the fat lady was warming up for the finale of many of our beloved boatanchor models and manufacturers.

As a broke teenager, I pretty much had to make do with whatever I could get my hands on for equipment.

Many have attributed the boatanchor renaissance to hams like me who having raised their families now have the disposable income to succumb to nostalgia and buy what we craved in our youth. I’ve been guilty of that and have enjoyed obtaining some of my own, usually paying more than their original cost new.

So, what happens to the value of much of the tube equipment as the generation that craved it passes or loses the ability to handle/operate/maintain them? I suspect the values will begin to decline, perhaps as rapidly as it increased. [...]

I confess, I've been watching for boat anchors at garage sales, flea markets and thrift stores. Partly nolstagia, partly because I just like radios that have DIALS and KNOBS, instead of buttons.

I enjoyed the following rant:

Has the Magic of Radio Gone Away?

I remember as a kid listing in on the short wave radio that wondrous feeling I got of the magic of radio.

I wondered how this was possible that a voice can be transmitted over vast distances and received... Radio was truly a magical device.

Today we have such wonderful communication devices and digital toys I often wonder what the children think of these items and if they can truly appreciate how they came to be?

Today most people of young take everything for granted. I find very few if any younger kids wondering how it works, why it works and where it came from.

I miss those days where we were amazed at the wonders of the new devices and what they did. I recently purchased my Daughter a new cell phone that can do everything but walk the dog. An amazing little device that can communicate all over the world, send movies, pictures, play games and music and so much more that I don't even know myself? She just took it and that was it!

Man, I remember when I got my first short wave receiver; I was glued to that thing like a magnet to steel! AMAZED at how this box was receiving signals all over the world and then when I became a ham transmitting my own signal and being heard in another location! WOW MAGIC! [...]

Well a big part of my interest in radio is understanding how the "magic" works, and then applying that understanding. The new radios are so fancy, you can't help being an "appliance user" when you start out, but I'm hoping to learn the basics of radio, and try to learn CW (Morse Code) too. I'm interested in radio because it doesn't need the infrastructure of a third party vendor like the internet or the phone company; the airwaves are free, if you can learn how to use them.

I'm studying for my technician's exam, and I can see that it's going to be a fun and interesting hobby.

The two articles above are from eHam.net, which I've had fun exploring. If you read the articles, be sure and read the comments too, some are as enjoyable as the articles.