Since the '70's, our government has steadily been printing more money: 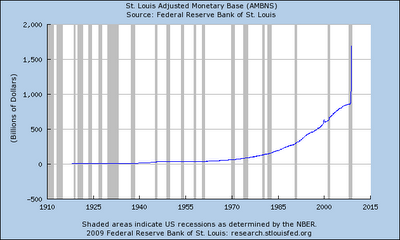 This graph in a recent post by Pat (Inflation and our "funny money" supply) is startling in it's implications. Neither Republicans nor Democrats have done anything to stop the devaluing of our currency since the 1970's. In fact, they all have been printing even more money and devaluing it even further. When will it stop? Will it stop? And if it doesn't stop? Where will it lead us? 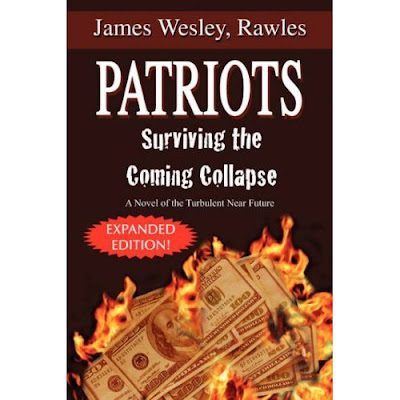 I've been reading a book called "PATRIOTS: surviving the coming collapse. It's a novel, in which a severe economic meltdown in the USA takes place. It was the description of the understated "crunch", the economic collapse when the dollar fails, that really gave me the creeps. What would the collapse of the American dollar actually look like?

The story starts with the US having 19 trillion dollars of debt, with interest on the national debt consuming 96% of government revenue. Most of it is "off budget", like the debts for the Iraq war, but it's still national debt. There is still interest to pay on it.

Ok, at this point you might say, "19 TRILLION DOLLARS of debt? No way, it could never happen." I would hope it wouldn't. But if you told me 10 years ago that we would even be talking about trillions of dollars of debt today, I would have said "No way, our government would never be that irresponsible". Yet, here we are. And our government has been taking debt "off budget", and borrowing from Peter to pay Paul. If they think it's ok to run debt up another 1 trillion, or 3 trillion... once you say it's alright to go down that road, then where does it stop? How much is too much?

In the story, European bankers start to express doubt that the US government can make the interest payments on it's growing debt, with serious results: foreign central banks and international monetary authorities began to dump their trillions of dollars in U.S. Treasuries. Foreign investors begin liquidating their U.S. paper assets.

The value of the dollar plummets. Businesses fail. Unemployment goes to 20% and higher. Ultimately it leads to a stock market collapse, and domestic runs on U.S. banks begin. Like in the Great Depression of the 1930's long lines of people form at the banks, wanting to withdraw all of their money. But unlike the 1930's, this time there is the promise of FDIC, "All deposits insured to $100,000." But the only way to let everyone withdraw their money, is to print even more money. This leads to hyper-inflation; the more money the government prints, the less it's worth. Think of Zimbabwe as a recent example.

Now this is, to me, where the story really gets scary. I figured that if a 1930's type "depression" happened, it would be bad, but we would all somehow muddle through it, just as we had in the 1930's. But there are some significant differences between then and now.

In the 1930's, the government hadn't over-borrowed and raked up trillions of dollars in debt. In the 1930's, roughly half of American families lived on farms. They may have been made poor by the Depression, but they still had means to grow their own food and scrape by.

The story goes on to describe a situation where American cities are gripped with rioting and looting. The National Guard and the Army Reserve are called up to quell the rioting, but many of them don't report in, because they are staying home to protect their families.

Inner city areas are burned to the ground, and no one can stop it. Factories near cities close down "temporarily", but never open again. The Freeways that run through the cities become impassable, due to the riots, and due to fuel shortages, with people running out of gas and leaving their cars on the roads.

Most of the goods and fuel shipments in the US are transported on 18 wheel diesel trucks that use the interstate highway system. They all pass through cities. The cities become impassable, so the shipments of goods and fuel stop.

Trains pick up some of the slack, but not enough, and even they are vulnerable; mobs soon learn they can rip up the tracks to derail the trains, and loot them.

Without fuel shipments to power plants, the electrical grid begins to shut down. The few remaining factories that are operating are shut down by this, as well as the oil refineries that make our fuel. Even the refineries can't produce enough of their own electricity to keep operating, because they, like everyone else, always assumed they could count on the national power grid.

As the power grid shuts down from lack of fuel, so do the telephones, the internet, radio and TV stations. We are plunged back into the dark ages, literally. Our civil institutions and the rule of law break down completely.

You'll have to read the book for the complete picture the author paints. Now I grant you, the author is a survivalist. His reason for writing the novel was to use it as a vehicle to teach many of the survivalist strategies and related knowledge he has compiled, in the context of a story where such knowledge would be applied. Therefore, he has painted the bleakest picture possible, as a canvass for that story (See review in link below).

One can argue that a real crash might not be so... severe? I'm sure there are lots of variables, but the story Rawles tells is very compelling none the less. If nothing else, you have to wonder, WHERE is all this endless deficit spending leading us? The disaster described above is completely avoidable, but will we? It often seems like everyone in government is either oblivious to or unwilling to deal with the dangers of huge deficits and inflated currency.

I know that with a personal or a family budget, if you start having "off budget" debts, your finances will be headed for trouble. Government budgets are no different. We must all live within our means. The consequences of ignoring that could be too horrible.

As for this book, I have to read it in parts, and then give it a break. It's intense. I'm not really of a survivalist mind-set. I like to be an optimist, balanced with a boy-scout "be prepared" attitude. The book is full of all sorts of useful tid-bits of information, such as "how long can you store gasoline before it's no longer useful in an automobile?" (about two years, unless you add chemicals to extend it's life). But the story... argh. I don't want to go there, not even mentally.

But even worse would be to go there actually, in reality. That's why I made this post about it. Let's NOT go there.

Lest this all sounds too depressing, the author says on his website that each of us has to decide for ourselves how bad things could get, and what preparations we want to make. Fair enough.

I hesitated to make this post at all, lest it sound too grim. I'd like to just forget about it, but then I keep seeing headlines like this one today:

Our national debt is already more than 10 trillion dollars. Where is it going to stop? It just makes me want to ring the warning bell. Forewarned is forearmed.

We should not go down this road. But if the nation does anyway, we had best keep our wits about us, try to steer for "damage control", and make preparations along the way as we think might be wise for our circumstances. And never give up hoping, praying, and affirming the best outcome.

Patriots: a customer review on Amazon

The Federal Deficit and the American Dollar

Has the slow portion of the collapse already begun? A case is made for it:

Has our nations current financial policies accelerated the collapse process? We may see as soon as next year:

What happens when Tax Cuts Expire in 2011?

Is there anything that can be done about it? I'm not sure, but I think the November elections this year will be our last chance to vote in politicians who can deal with the reality of our present situation:

November is probably our last chance to stop the runaway gravy train, before it derails.

Don't over stated about the impact of public. People talked about it when it was $5 trillion; it would be bad if went up to %10 trillion. Now is $19 trillion, and there is hiccup in the economy but so what?

From the other side, there is a good opportunity to get the money from this. Look at the last couple trillion dollars that has been spent;it went to Wall Street. And Wall Street understand this potential.

The question is not whether the debt will go up or down, but we should ask how high it can go before collapsing the system or the American economy. Will that be $30, 50 or 100 trillions?

Remember, the America is the only country in the world that can do this. but for how long?

This may be well more than a hiccup. Some people are saying that our currency has already collapsed, and this is just the early stages of the collapse:

The two articles I link to in that post make a good case for it. James Turk in particular explains how we've been able to put off a collapse for so long, but also why we can't keep doing it for much longer.