While reading many sites on the internet about Ham Radio, I came across this bit of advice for Ham Newbies from Ron Hashiro in Hawaii:

Getting Started in Ham Radio

So, you're studying for your first amateur radio license -- probably the Technician Class license -- and wondered what kind of equipment to get in the meantime. If I could do it again with modern equipment, here are some of my thoughts.

Enjoy, and feel free to drop me an e-mail if you have any questions.

I feel the first thing to buy for ham radio is not the radio transmitter itself, but a decent receiver. If you pass your exam for the Technician Class license, you'll be able to talk on the VHF (50, 144 Mhz band) and UHF frequencies (440 Mhz band) as soon as your license is processed by the FCC. (By the way, these days, the VEC-FCC process takes as little as a week to complete, and you can transmit as soon as you can see your callsign on any of the various web callsign databases on the Internet. When I was first licensed, it took about 6-8 weeks, and you had to wait for the processed license paperwork to arrive in the mail.)

So, the initial temptation might be to get a transmitter or a combination transmitter-receiver called a transceiver. But, you might underbuy or overbuy on your equipment. So, it makes sense to try it out on a comparatively inexpensive solution. Get a "police" scanner first.

Scanners can go through a number of frequencies very quickly. You can monitor all the popular repeaters and simplex frequencies in a matter of about one or two seconds. I listen to the local frequencies with a scanner, and when I hear someone that I want to talk with, I turn on my radio (if it's not on) and make a contact.

For fun, you can also add the local aviation, weather and other frequencies to monitor -- and lock them out if you don't feel like listening to it at the moment. Best of all, they cost around $100 or so new. If you're fortunate to find a used model, your cost might be less.

Any old time ham will tell you that a good, solid and sensitive receiver is a must because there's an old adage "If you can't hear 'em, you can't work'em." -- meaning that if you can't hear the other station, you can't make a two-way contact with them. That makes sense. But, starting out, you probably don't need a top-of-the-line scanner. If you go to your nearest Radio Shack, you'll find a number of police radio scanners available. You can get started with one of these. See Radio Shack Scanners for starters. Look for one that you can attach an external antenna.

I would get a model that plugs into the AC wall outlet, so I wouldn't have to worry about charging or changing batteries. You can program a number of interesting ham frequencies: the nearest VHF and UHF repeaters on your island. Then, you can listen to the amount of conversation present, and get an idea of how strong the repeater signals are in your area. That'll determine how much radio and antenna to buy next. You'll also hear how conversations are made on the air, and that'll help you pass the Technician exam. [...]

Ron's page has lots of further useful advice for purchases later on as well. I'm just excerpting the first part because that's where I'm at right now; I have no equipment, and I'm facing my first purchase.

This sounds like good advice. I have no idea what kind of radio traffic I can receive where I live. A scanner will put me in touch with what is happening locally. I'm not sure at this point how much I'm going to get into Ham Radio, but I figure I can't go wrong starting with a scanner. If it helps me pass the Technician exam eventually, so much the better.

So the question is, what kind of scanner to buy? I have looked at Radio Shack on-line, and Amazon.com too. There are so many scanners to choose from. I thought these looked promising: 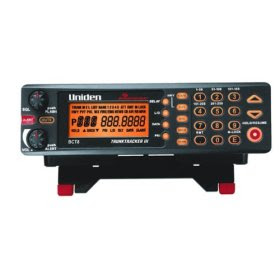 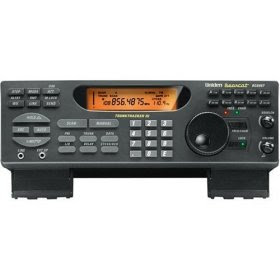 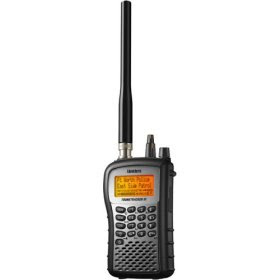 Now these scanners are all in the $200 range, rather than the $100 range that Ron spoke of. As I read reviews posted from buyers, a lot of people complained about the cheaper scanners being older "outdated" models using inferior technology. These models were rated higher for satisfaction, but then more expensive stuff usually is. The TrunkTracker feature seems important, but how important is it? Would a cheaper scanner do? Or would I find myself saying "darn, if only I had been willing to spend a bit more..."? It would be nice to get a satisfactory purchase the first time.

I generally prefer radios with dials and knobs, rather than buttons. But it seems like everything has buttons nowadays. One reviewer warned against analog radios, saying they cannot pick up digital transmissions. Reading the customer reviews can make your head spin, especially when you don't understand all the jargon yet. I did find this one review for the Uniden Bearcat BCT8 amusing:

This scanner has no problem keeping track of ALL radio traffic. I live in densely populated San Francisco near the entrance to the bay and right under the GG bridge. This little scanner gets it all. CHP, Bridge Patrol, Bridge Electricians, Bridge Shuttle bus. SFPD, SFFD, EMS. Yellow Cab, DPT, Harbor Pilots, Tugs, laundry delivery trucks, totally (too much information)TMI! In search mode I get signal from as far north as San Rafael (Marin County) as far east as Oakland as far south as Burlingame with the supplied telescopic antenna! For mobile applications ditch the supplied little wire antenna'n get a magnetic roof mount.

Bear Tracker works. Had it on the road 2day and it picks off Mobile Extenders left and right.

Programing is as easy as spending a few hours in search mode and entering the stations as you get them. The Trunk tracking feature rocks. In time you will be able to tell who is who. Dont want that Freq? Delete it easily.

A well designed and easy to use product. Crystal clear reception, intelligent layout and the pre-programmed freqs. are amazing.

Pricy perhapes, but worth it. I feel like I have been scanning for years and this is only my 4th day.

5 stars for delivering the goods, in spades. I am very happy.

TMI! LOL! Having lived in San Francisco for 23 years, it brought back memories. The atmosphere there always seemed so "busy". Is it any wonder, with all that radio traffic going through your brain, 24/7, in addition to all the commercial TV and radio stations as well?

When I visited South African in 1983 with Pat, there was a quietness there that seemed remarkable. At that time the South African government controlled commercial TV and radio stations, and there weren't many of them. In fact, the TV stations then only broadcast in the evening. I attributed much of the quietness to the dearth of broadcast frequencies in the air.

Many years later, when we moved here to rural Oregon, I experienced a very similar quietness like I had in South Africa.

We have one broadcast TV station within range of our house. The station is in the nearest big town. You need a special antenna to receive it, but it still comes in badly so we never watch it. In theory we have 18 commercial radio stations within range of our house, according to the internet. But in fact, we can receive only a handful of them. That may be good reason to spend a bit more to get a quality scanner, to make sure I can get the best reception. I may have to look into getting a decent antenna too.

I'm not sure how much radio traffic I can pick up here. We are close to the Oregon coast, and we often see Coast Guard helicopters flying by. There is a sizable airport in town too, so I'm sure there is Air and Marine radio traffic. And since there is an active Ham Radio club in town too, there has got to be a considerable amount of local activity for a scanner to pick up, I would think.

I've ordered a book, "Two-Way Radios & Scanners For Dummies", to see if I can get up to speed on what the different scanner features mean, and help me understand what I should look for in a scanner for my particular situation. I don't know if it's silly to buy a scanner for $200, when I could buy a transceiver for that or even less (and one with knobs too!). Perhaps it's a silly comparison to make; there are lots of variables to consider that I don't fully understand yet.

In the meantime, if anyone has some advice or would like to post about their own scanner purchasing experiences, please feel free to do so here.

Here is a page with a list of the frequencies where you can hear ham radio:
http://www.arrl.org/FandES/field/regulations/bands.html

The www.arrl.org website is a very good resource for information about ham radio. I would be happy to try to answer any questions you might have as well.

Thank you Howard, that's good information to know. I'm collecting a bunch of useful bookmarks about Ham Radio to study, and Arrl.org is definitely a site I will look over in detail.

Hi, I just picked up a PRO-54 PATROLMAN Scanning Receiver at Goodwill and it doesn't have an antenna. Do you know what kind of antenna I would need to get?

Sorry ben, I couldn't say. Have you tried radio shack? They might be able to get it for you, or suggest an equivalent one that would work.

Found your post. It's interesting to know your Radio Shack has scanners in the $200 range. I visited mines last Sunday afternoon looking for parts and found one for about $110 or so.

There's all kinds of units from the relatively basic and inexpensive, sometimes on closeout to the $500+ models. I have a very old desktop unit that today's equivalent goes for about $110, and it scans up to 200 channels. I limit it to the amateur radio band and scan for ham stations. If I really wanted to, I could open it up and listen to aircraft, EMS and other freqs.

The choice of a digital scanner depends on your local frequencies. While some are available here, I generally stay away from it -- just personal preference and what I wish to listen for.

The choice of modes, and activity you wish to listen to is strictly a location-by-location decision. Good luck on your adventures!