How many people are fiscally conservative, but socially liberal? Nearly 60% - the Majority? 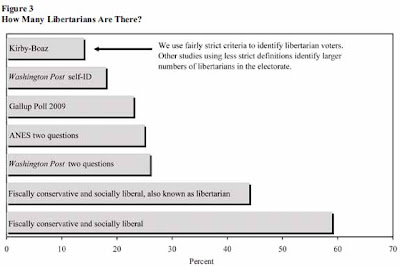 How Many Libertarian Voters Are There?

In our new study, David Kirby and I round up various estimates on the number of libertarian-leaning voters. Our own calculation, 14 percent, is actually the lowest estimate.

We use three questions on political values from the generally acknowledged gold standard of public opinion data, the surveys of the American National Election Studies, and find that 14 percent of respondents gave libertarian answers to all three questions. But other researchers have used somewhat looser criteria and found larger numbers of libertarians: [...]

One can split hairs over the definition of "Libertarian", but most people seem to relate to the idea of fiscal conservatism combined with social liberalism, which goes against both the politically ideological Left and Right. In other words, most people are in the moderate, non-ideological center.

For too long this majority has been battered between two extremes. Both Left and Right has been pushing for bigger government to enforce their ideology. Now, it's time to do something about it.