Is it a GOP comeback? Or lesser of two evils?

It's an interesting trend, but if people are merely voting against the Democrats by voting Republican, then the GOP had best not get over-confident, by trying to count their chickens before they've hatched: 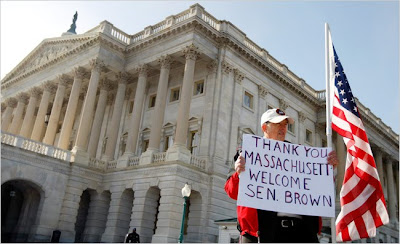 [...] The independents who swing New England elections abandoned the party as the Bush era drew to a close. They were in revolt over the war in Iraq, the struggling economy and the strong strain of Southern social conservatism that was dominating national Republican politics. It was crushing for the remaining Republicans in a section of the country that once saw itself as the foundation of the party.

But Republicans see Mr. Brown’s win — and an earlier victory in the New Jersey governor’s race — as evidence that independents are moving back their way, a possible harbinger of good things to come.

But they should not get too far ahead of themselves. They still face difficult challenges in most of those states, given Democratic demographic advantages. And off-year and special election Republican victories in Democratic territory offer no certainty of winning in the more heavily contested midterm elections, with their accompanying greater turnout. Also, ideological divisions being exhibited in primaries in Connecticut and New Hampshire in particular could ultimately cost Republicans.

Still, they have reason to be optimistic after being nearly wiped off New England’s political map. One reason is that the current national political fight is centering more on the economic issues that are part of the fabric of New England political ideology, rather than the divisive social issues that can drive less conservative Republicans away from the party.

“What’s fueling the resurgence of Northern Republicans is public anger over the economy and an impression among New England voters that ‘big government’ is back with a vengeance,” said Bob Stevenson, a former senior Senate Republican aide who has long worked in New England politics. “New Englanders tend to believe in fiscal restraint, self-rule and self-sufficiency.”

The addition of even a few moderate Republicans to the Senate could change the dynamic in that institution. Conservatives are so dominant now that Ms. Collins and Ms. Snowe face intense pressure to vote with their party, particularly after they broke ranks to provide the crucial votes to pass the economic stimulus measure early in 2009. Mr. Castle, should he prevail, would add another strong and experienced moderate voice.

The philosophical direction Mr. Brown intends to take remains to be seen, but even his fellow Republicans said he could not compile a heavily conservative voting record and expect to be re-elected in Massachusetts in 2012 when his partial term ends.

Ms. Snowe, typically a favorite target of Democrats as they try to build a 60-vote bloc to break filibusters, said that Republicans representing Democratic states — or vice versa — tend to push the debate toward the middle to appease their diverse political constituencies.

Maybe what we are seeing is a victory for centrists.

The Republicans have an opportunity here, but they could easily blow it, if they insist on making the Republican party a purist ideology, instead of using it as a political vehicle to be cooperatively used by a large diverse base, to achieve goals the members all have in common.

This means not kicking people out when they are not ideologically rigid, being flexible, letting states make their own choices about how they want their Republicans to be.

We don't need a GOP dominated by the South, or the North either. What good would it do to gain the North, but then lose the South? If we emphasize fiscal issues as our spearhead, and keep social issues, the culture wars, primarily fought in our culture more than our legislature, I think we have a good chance of a comeback. But if the Republicans continue to support big government, and continue to push legislation to control controversial social issues, then I doubt we stand a chance.

I've posted before in detail about the Death of Republicanism in New England. There are lessons to be learned from that. This potential Republican Revival we are seeing now will only succeed if the voters of each state can use the party as a political vehicle, instead of having to join an inflexible ideology.

There has been a lot of criticism by GOP Uber-conservatives of Republican Senators Snowe and Collins of Maine. I visited with family in Maine last year. I read in the newspaper there, in a political article, a comment by a voter addressing that criticism, who said: "We sent Snowe and Collins to Washington to represent the State of Maine, not the GOP". I think that is very true of the voters in Maine; they tend to not be rigidly partisan, and like their politicians to reflect that.

I think it's largely true for New England as whole; they expect their senators to be loyal to their state first, their party second. They are expected to compromise when necessary, to please the voters of their state.

Brown of Massachusetts knows this. If he turns into a GOP Uber-conservative, he will be toast. He won by listening to his constituents, not the GOP ideologues.

Here in Oregon, we had a wonderful GOP senator, Gordon Smith. But then the GOP ideologues began to complain he was a RINO, and undermined him, just enough to help the Democrats defeat him. Now we have two Democrat senators, and some of the highest income taxes in the nation, second only to NYC. Way to go... NOT!!!

I already am hearing the GOP Uber-conservatives complaining that Brown is a RINO, not good enough, not pure enough. Are we as a party going to shoot ourselves in the foot AGAIN, ending the Republican revival before it's begun?

If Democrats and Republicans keep sticking to ideological extremes, then perhaps a third party will have a good chance of forming. One that could attract independents, and both Republican and Democrat moderates might actually succeed, especially if WE continue to flail and fail.