Religious Observances, and The Thing Itself 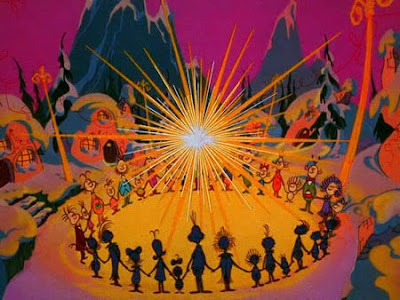 Taking Up the Dr. Seuss School of Catholicism

Any Sunday school kid knows that the best piece of Christian theology was written not by St. Augustine or Reinhold Niebuhr but by Dr. Seuss. How the Grinch Stole Christmas! - the story of how the Whos joyfully celebrate Jesus' birth even after a spiteful wretch robs all their holiday stuff - portrays faith more meaningfully than any church father or Yale philosopher ever did. Published for Christmas 1957, the book's obvious target was Yuletide commercialization. But its deeper message - don't confuse the accessories of religion with religion itself - seems especially relevant for Roman Catholics like me on Easter 2010.

This is the most uncomfortable Easter that Catholics have faced since the throes of the U.S. clerical sex abuse scandal in 2002. A new deluge of priest-pedophile stories, mostly in Europe, has cast another Good Friday pall over the resurrection celebration. This time some of the hierarchical cover-up may have even involved, if only indirectly, the man who would become the current Pope, Benedict XVI. And the Catholic Church's defensive response (as persecuted as the Jews?) has once again made it look like a dark fraternity in a Dan Brown novel instead of a luminous shepherd of souls, a self-interested corporation instead of the selfless ministry that Christ entrusted to St. Peter.

Little can alleviate the pain and suffering of the abuse victims. But at least in one sense, the Dr. Seuss sense, Catholics can use the Easter spirit of renewal to turn this heartbreak into something positive by putting their religion - their singular communion with Jesus' life and teachings - above their church. We're in this mess largely because we've continued to let the Catholic Church believe that it's somehow more important than the Catholic religion. And that's got to stop. [...]

Where that gets messy is, each Catholic's interpretation of what IS the Catholic Religion, what it means. I'm not Catholic, but as an outside observer, there seems to be a growing dissonance between what the Clergy in the Vatican believe, and what Catholics around the world believe.

I've always been more attracted to spirituality than religion, because while religious observances and rituals can be helpful reminders of what's important, too often the observance of them becomes more important than the thing they were meant to focus you on; then, the vessel matters more than the contents.

I've got my opinions about what's happening with the Catholic Church, but I'm not going to get into it here; this is for Catholics to sort out. I'm sure they can, and hope they will. I just thought this essay was thought provoking, and might help move the discussion along. If the topic interests you, read the whole thing.