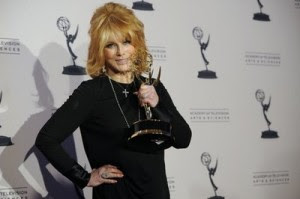 Read why she is is "One of the good ones":

On Saturday night here in Los Angeles legendary actor Ann-Margret finally won an Emmy after 6 previous nominations (she’s also been nominated twice for an Oscar). While the main Emmy awards are next Sunday, the “Creative Arts” subset were handed out Saturday night to behind-the-scenes people and actors nominated for guest-starring roles. The now 69-year-old performer won her statuette for Guest Actress in a Drama Series on Law & Order: SVU. Why they would not have category like this air on the main show is beyond me, but that’s another issue.

I mention Ann-Margret because in this day of Hollywood leading the charge against our military, making movies and television shows that regularly cast our troops as villains, it’s worth remembering that not all actors are, or have been, that way. Some have a genuine and deep appreciation for what our military does and a love for this country. Ann-Margret is one of those people.

While she has never been publicly politically active or worn her personal politics on her sleeve, we know where she stands when it comes to our veterans. While Jane Fonda was encouraging the enemy in North Vietnam, Ann-Margret regularly traveled with Bob Hope to the war theater to entertain our troops. Considering the left’s attitude even then about that war, not every one was rushing to join Hope’s team, but Ann-Margret was there and was one of his “regulars.”

While that was quite some time ago, her commitment and appreciation for our troops has been consistent. Probably the most illustrative story of her impact on our vets is already all over the net, but it’s worth bringing to you here. It’s the simple telling by the wife of a Vietnam vet who went with her husband to a book-signing so he could meet Ann-Margret. What happened changed his life. [...]

Read it, it's a great story. There's also more about Ann, and pics and video clips too.

My feelings for Ann-Margret are, unfortunately, impure.

With respect, but, impure.