The Government's Mill Stone for Our Necks

Don't let them tie it onto us:

Bureaucratic Web: Those who wondered what was in the health care overhaul bill now have a chance to look inside. What they see is a snarl of lines, arrows and geometric shapes that will do nothing to improve medical care.

Republican Sen. Sam Brownback of Kansas, GOP Rep. Kevin Brady of Texas and the minority staff of the Joint Economic Committee have provided a priceless public service by creating a flow chart (below) of the federal health care system that is being created by the Patient Protection and Affordable Care Act. 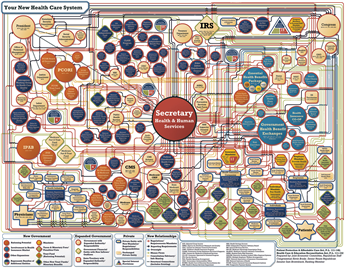 The chart displays, in words we can't improve, "a bewildering array of new government agencies, regulations and mandates."

At the center of the new federal health care universe is the secretary of Health and Human Services, who has been granted supernational powers. Radiating from that hub are the lesser celestial objects, such as Congress in the upper right corner, the president in the upper left, and doctors in the lower left.

Patients can be found near the bottom right corner. Remember them? They were supposed to be what the health care overhaul was all about. But they've been nudged, as almost an afterthought, to the fringe of this expanding universe.

Between patients and the secretary of Health and Human Services sit galaxies of red tape, taxes, regulations, federal programs, state agencies, mandates — and thousands of bureaucrats.

But the HHS secretary does not treat patients. Doctors do. And the expanse between them, according to this chart, is vast. They are separated by a government that is growing deeper, wider and more labyrinthine, an administrative state that will ration, dilute and ineffectively manage health care. [...]

Read the rest; it's even worse than the chart!

Remember in November, so we can REPEAL and REPLACE this garbage.

Why Obamacare is a "healthcare bridge to nowhere" that can't be "tweaked"
Posted by Chas at 2:52 PM