From a Rabbi's blog, earlier this month:

I'm hesitant to write about Chelsea Clinton's upcoming wedding to Marc Mezvinsky, who was raised in Conservative Judaism, because I want to respect the private lives of the bride and groom. However, when the bride is the daughter of the 40th President of the United States, I suppose she is classified as a celebrity and her wedding is fair game as a topic for discussion. 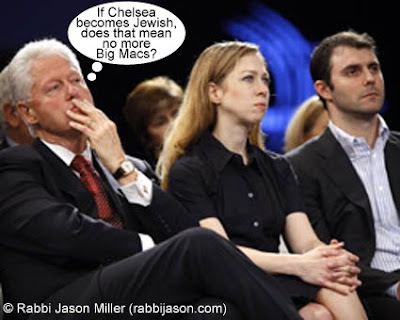 Some interesting questions surrounding the Chelsea Clinton wedding should make this even more interesting:

* The wedding will take place on Shabbat (July 31, 2010), so how will this affect whether observant Jewish (shomer Shabbat) guests will attend. Even if they stay within walking distance of the Astor mansion, according to Jewish law weddings are not to take place on the Jewish Sabbath.

* If Chelsea does convert before the wedding, will her conversion be disputed publicly by the Orthodox who will claim that a Conservative (or Reform) conversion isn't "kosher." And, many will question her commitment to Judaism -- didn't she do this only for the sake of marriage and how much preparation and deliberation did she put into this?

* If Chelsea doesn't convert, how many of the Bill and Hillary's Orthodox friends will attend the wedding anyway? Will their attendance at an interfaith wedding (and on Shabbat to boot) signify an endorsement? And what about Conservative rabbis who are technically not supposed to attend interfaith weddings? Will some make an exception for such notable nuptials?

* Finally, might this high-profile interfaith wedding turn the tides and lead to greater acceptance and sensitivity toward interfaith marriage? After all, as Gibson writes, "The main body of Conservative Judaism [CJLS] voted to allow interfaith families to be buried in Jewish cemeteries, and in March, the Jewish Theological Seminary of America hosted a two-day workshop "sensitizing" students to "issues of intermarriage and changing demographics." There is even talk of allowing Conservative rabbis to attend the interfaith weddings of friends -- and this just four years after the movement adopted an official policy emphasizing the importance of converting a non-Jewish spouse. [...]

I would question, just how much of a religious conservative the groom is, because of the things mentioned above. He doesn't seem very "observant" of some things. Just because he may have been raised to be strictly observant, doesn't mean he chooses to continue to be, especially if he's going to marry a shiksa. Or are some observances being overlooked due to the "celebrity" factor? Anyway, time will tell what's up with them. I won't be losing any sleep over it, and they don't look worried about it either: 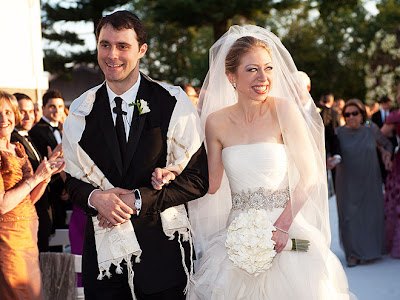 Now that the wedding has happened, here are some more details on the interfaith aspects of the wedding from Rabbi Miller's blog.

Who is Marc Mezvinsky? Chelsea Clinton's Husband is Invesment Banker at Hedge Fund

Thanks for reposting this.

Thank YOU. It was an interesting perspective you gave, and no one else seemed to be talking about it.

Bill Clinton is a vegan.