SUBSIDING STORMS: The geomagnetic storms of March 10th and 11th are subsiding. Earth's magnetic field began shaking on March 10th in response to a CME impact; the reverberations continued for more than 24 hours. In Sweden the auroras were so bright, they competed with campfires: 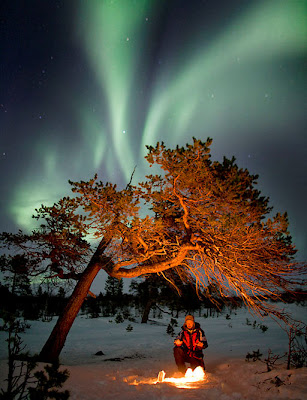 "When I was sitting next to the fire and had the Aurora dancing above me, I felt like it could have been 100 years ago," says photographer Peter Rosén in Sweden's Abisko National Park. "I wonder what people thought when they saw this phenomenon in centuries past. Old stories say that the Sami people believed the Aurora was home for the spirits of the dead, and that we should show respect when the lights appeared."

Sunspots are continuing. Solar storms, not so much. For now.

And a bit of solar storm history, with contemporary relevance:

CAUTIONARY TALE: This week marks the 22nd anniversary of the Quebec Blackout. On March 13, 1989, a geomagnetic storm brought down Hydro-Québec's power grid and blacked out the entire province. Brownouts and other power irregularities were experienced across much of North America. Today's "smart power grids" are even more vulnerable because they are interconnected by high voltage lines spanning thousands of miles. In good times, this arrangement allows utilities to guide power wherever it might be needed. During geomagnetic storms, however, it spreads the danger of a blackout far and wide. What we need is a Solar Shield.

The Solar Shield article is interesting, it mentions the Quebec event of March 13th 1989, and other storms like the Carrington event of 1859. The Shield is a warning system that interprets solar data and alerts utility companies to act accordingly.

The Solar Storm that hit Quebec in 1989