The Oregon Tsunami BUZZ is getting louder

It was buzzing before, but with recent events, the talk about tsunami preparation is getting even more attention now:

Senate President Peter Courtney likes to emphasize the dramatic. But he's not over-exaggerating when he talks about Oregon's potential for killer earthquakes and tsunamis.

The science is what scares him: The region's last great earthquake occurred Jan. 26, 1700. Geology shows that a cataclysmic quake occurs here every 241 years, on average. Basic math shows we're overdue for The Big One, a quake that will rival or exceed Japan's devastating 9.0 earthquake.

Bear in mind that thousands of people have died, and more are missing, even though Japan's earthquake preparations are far greater than Oregon's.

"We can build buildings and highways that will withstand this, but I don't know how much time we'll have," Courtney told the Statesman Journal Editorial Board last week. "It's very hard to get people to understand that this thing is going to be of a magnitude that is unimaginable." [...]

Of course, much of the rest of the article is all about how we don't have the money to build new earthquake/tsunami resistant bridges and structures, and how we have to go ahead and do it anyway.

If they hadn't already spent decades wasting our tax money on CRAP, spending way over budget, and raising taxes to the point that they've driven many revenue payers out of the state, we would have the money, or at least the ability to finance it.

They're concerned about a physical tsunami. Too bad they aren't equally concerned about the fiscal tsunami that our over-extended state government has helped to create. But that's another story. On with this one:

Oregon coast escaped loss of life in tsunami, but next time it could be different

[...] In wake of the tsunami, which caused millions of dollars in damage in Brookings Harbor, two main themes emerged in debriefings this week: the need for more education of the population and better communication with the public.

Emergency managers, coastal authorities and officials with the Oregon Department of Geology and Mineral Industries have spent a decade educating the public about tsunamis. DOGAMI has drawn initial inundation maps, outlining the danger zones, and many evacuation routes are in place. Most coastal counties have reverse 9-1-1 systems and sirens dot the coast.

Periodically, emergency officials hold conference room drills, running through tsunami procedures. All that snapped into play on Friday morning, as command posts were set up, calls went out and officials knocked on doors and scoured campsites as emergency managers fielded an calls from officials, the media and residents.

But in the wealth of information, with advisories, watches and warnings flowing from tsunami experts at the National Oceanic and Atmospheric Administration's center in Alaska, one simple message got lost: Tsunami waves arrive and then surge again and again and again over perhaps 24 hours. 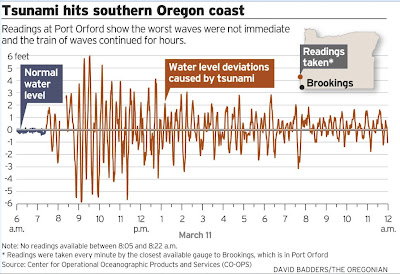 "You don't get just one wave," said Ian Madin, chief scientist at DOGAMI. "You get a series of waves. It's like dropping a pebble into glass of water. With a tsunami, the second or third wave could be the largest."

Tsunamis are so infrequent in Oregon that people forget about the dangers -- and in this instance the state had hours to prepare.

When a powerful earthquake hits off the coastline along the Cascadia fault, people will have 20 minutes to flee.

"If you are knocked to the ground and it lasts two to three minutes, don't wait for somebody to tell you it's the big one, McCraw said. "You need to get to 50 feet elevation."

DOGAMI has a full-time staffer working on outreach along with county emergency managers, but Oregon's education effort is focused on the coast.

That misses the rest of the population who flock to the beach throughout the year, especially in summer.

"We are a nice tourist spot," McCraw said. "What would have happened if this had been the middle of July when we would have doubled our population in the county and had school kids on the beach?"

Burns said the state needs to push hotel, motel and rental owners to tack up warning signs that include show evacuation routes.

DOGAMI has drawn about 40 evacuation maps but most are based on pre-2006 data and some rely on information from 1995. Only Cannon Beach and the area from Bandon to Brookings have up-to-date maps. The department plans to finish its mapping of the coast by 2013 when a four-year $2.8 million grant from NOAA ends. At the same time, the public needs to prepare, officials say. [...]

On one of our ham radio nets, I heard someone speculate that we've seen earthquakes moving clockwise around the Pacific rim: Chile, New Zealand, Japan. "Maybe we're next" they said. Well if it's really traveling clockwise, I would guess Alaska might be next. But who knows?

I don't doubt the possibility of a tsunami threat; but it's impossible to predict. I also have to wonder which one is most imminent; the physical or the fiscal one? And many of the preparations of the former are also applicable in dealing with the aftermath of the latter. I suppose that's convenient.

Either way, I guess the Boy Scout motto applies.