New, as in newly released recordings. Some songs that I've never heard her sing before, and some I've never heard before at all. I placed a pre-order on Amazon.com, and it shipped on the release date. It arrived recently: 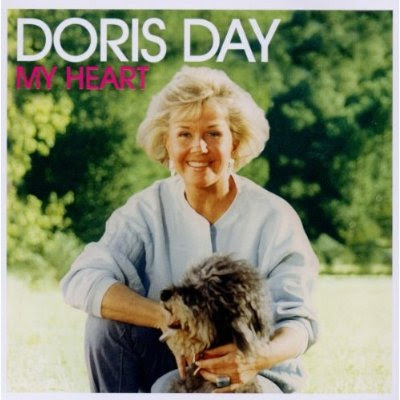 2011 album from the veteran entertainer. This is Doris' first studio album of new material in 17 years; a dozen songs of a timeless quality, with nine brand-new recordings produced by top UK record producer Ted Carfrae from sessions originally produced by Day's late son, Terry Melcher plus a trio of Day classics.

Doris Day has been fully involved with the musical selections for this special release. Her son Terry Melcher--who was known as a songwriter and producer for folk-rock pioneers The Byrds and other artists--co-wrote four of the new songs with Beach Boys member Bruce Johnston: the emotional title track "My Heart," the romantic "The Way I Dreamed It," the haunting "Happy Endings" sung by Melcher with a newly recorded spoken-word introduction by Day for her fans and the single release "Heaven Tonight."

Also on the set list are three classic rock-era favorites: Joe Cocker's ballad "You Are So Beautiful", the Lovin Spoonful's joyful 1966 hit "Daydream" and The Beach Boys' nostalgic "Disney Girls," the latter written by Bruce Johnston, who co-produced three of the recordings on the album. Sony.

We played it the first time, during dinner. At first, I was kind of shocked; the songs at the beginning were done in the modern pop-music style; not what I'm used to hearing Doris sing. But the styles changed as the album progressed, with some real surprises and treats. She dedicated one song, "My Buddy" to her son Terry, who died of complications of melanoma in 2004.

She explained (on the disc!) how he had been her "buddy" in so many ways, and how he had been a singer in his own right. She then introduced the next song, sung by Terry, called "Happy Endings".

There wasn't a dry eye at the dinner table; it was very moving. 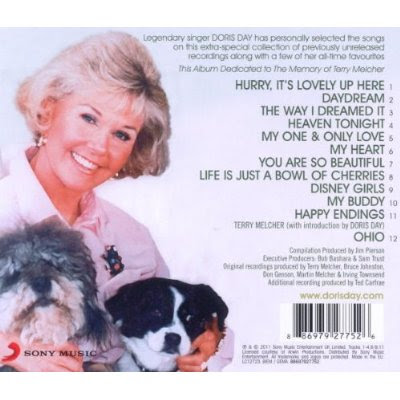 All things considered, it's a great and varied collection, demonstrating her range of styles. A few of the songs alone were worth the price of the album.

After hearing Terry sing, I became curious about his work and his life, so I did some searching on Google.

Terry's Wiki Page had quite a bit of information. But I also found another page on a blog, written about him by someone who knew him. It had some interesting comments, and a picture of him from a record sleeve: 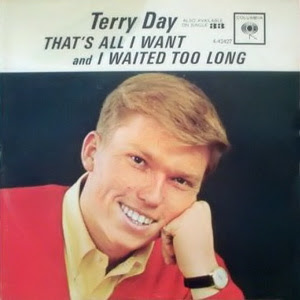 It was in the early 1960s when I found myself sitting at a baby grand piano in a beautiful but unfamiliar home in Beverly Hills going over some new songs I'd written. I recall being nervous as I played because I couldn't help but realize somewhere nearby was Doris Day, one of the most popular entertainers in the country at the time. Just like a million other guys, I had a crush on the lady and was fearful that at any moment she might choose to speak to me.

Actually, the reason I was there was not because of Doris Day, but because of her young son, Terry Melcher, whom I'd met a few days before. I had recently been discharged from serving a two year stint in the Army and was trying to get back in the music business when a mutual friend introduced us. Terry seemed impressed by the fact that, during the late 1950's, I had been lucky enough to have some success as a songwriter, having my songs recorded by popular stars of the time such as Russell Arms, Jimmy Darren, Ritchie Valens, Yvonne De Carlo, and Gail Robbins, among others.

Because of my past success and our mutual interest in the music business, Terry and I hit it off almost immediately. He was good looking, rather tall with light skin and looked like a typical Southern California surfer. He also struck me as being very mature for his 18 years and, although I was about seven years older, we seemed to enjoy a compatible sense of humor as well as our passion for music. After we chatted for a while about the popular songs of the day, he asked me if I'd come over to his house so we could practice singing some of my songs and hang out together. I was happy to accept his invitation.

A few days later we were in Terry's den, sitting at his piano and going over some of my material. It didn't take me long to recognize he had a very good ear for music. He would easily harmonize to my singing and seemed to have near perfect pitch. Up to that time we were just fooling around but then I asked him if he ever thought about recording as a vocalist. He seemed to be excited at the suggestion and, after a moments pause, he said he liked the idea of performing on a record. He immediately added he'd be glad to finance it and, since he knew I had already done some independent record producing, asked if I would handle the production.

The next day I hired my friend Jack Nitzsche as my arranger and asked him to call my favorite studio musicians to play the background, including Hal Blain, Leon Russell, Carol Kaye, and Glen Campbell. I then booked a three hour session with Stan Ross at Gold Star recording studios where I produced almost all my records. It was just that easy. Terry and I had selected a song of mine to record entitled "That's All I Want". It was an upbeat rock tune that had a powerful built-in arrangement for a back-up vocal group. Jack also liked the song and did a great horn arrangement that added immensely to the final result. The basic sound track started out with a strong combination of horns and voices and then settled into a driving drumbeat. As I recall, Jack's wife Gracia was one of the female background singers as well as Darlene Love and a couple of other friends. There just seemed to be so much talent around in those days. [...]

Terry gets a copy of the record and brings it home to his parents, and... well, read the whole thing; it's a charming story. A real treat for anyone who's interested in the old days of the music biz.


UPDATE: I've been reading more about the My Heart album and it's release. Many of the songs were recorded around 1985, to be used in Doris' cable TV talk show, Doris Day’s Best Friends on CBN. The show only had 26 episodes, but there was a wealth of music recorded for it.

And the good news is, it looks like there are even more original recordings that could be released in the future. Goody!