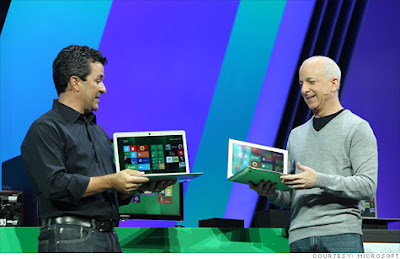 Can Windows 8 save the PC from extinction?

ANAHEIM, Calif. (CNNMoney) -- There's no question that Microsoft got the message: Mobile devices and tablets are the future of computing. Here's the next quandary: Is Windows 8 enough to salvage the PC, or is it too late?

Love it or hate it, Microsoft made a bold bet with its radically redesigned, re-engineered Windows 8. It rejected Apple (AAPL, Fortune 500) chairman Steve Jobs' declaration in March that the post-PC era has begun.

Rather than simply putting its Windows Phone software on a tablet to try to compete with the iPad, a battle all other rivals are currently losing, Microsoft (MSFT, Fortune 500) gambled that people want more out of their tablet experience. It believes that buyers -- including home users, not just office workers -- are still clamoring for storage, processing power, and robust content creation tools.

Yet consumers have been voting "no" with their pocketbooks. PC sales growth has tumbled in the United States and have even come to a screeching halt globally. The unstable economy has contributed significantly to that, but the iPad has also chomped away at the PC. When Hewlett-Packard (HPQ, Fortune 500) decided to exit the PC business, CEO Leo Apotheker cited as a prime reason that "the tablet effect is real."

With Windows 8, Microsoft is in a sense betting the house on form factor. The company believes that when people buy an iPad, what they really want is a PC on the go that's just not available to them yet.

"It looks like Microsoft is finally on the right track, writing the evolution of the Windows PC on its own terms," said Al Hilwa, analyst with IDC.

Time is not on Microsoft's side. It's still very early on in the Windows 8 development cycle, with the developer preview just launched on Tuesday. Microsoft wouldn't say when Windows 8 will be ready for a test release, never mind general availability. Meanwhile, the iPad is already five months into its second-generation device.

"I don't think Windows 8 can save the PC market," said Zeus Kerravala, analyst at Yankee Group. "The simplicity and portability of a tablet makes them ideal for what most people want to do with computers."

Still, others say that the PC, though fading, is far from dead. IPads are great complimentary devices, but the PC is the only serious content creation device on the market. With Windows 8 could be the missing bridge between the desktop and mobile worlds. [...]

We shall see. Read the whole thing for embedded links, and a brief demo video of Windows 8. It's supposed to provide full PC functionality, but with a user interface providing a "tablet-like experience", optimized for use with a touch screen, but also with an option to use a more traditional desktop with a mouse. Apparently, the user interface looks a lot like the user interface on Microsoft's Smart Phone.

I think the PC market will continue, but it will be smaller than before, because tablets and other internet devices will satisfy the needs of many people, who just don't want or need a full size PC. Microsoft may get a part of the device market, but may not be able to establish a monopoly there, like they have in the PC market. Time will tell.

Windows 8 aims for tablets and more

Windows 8 and your office furniture