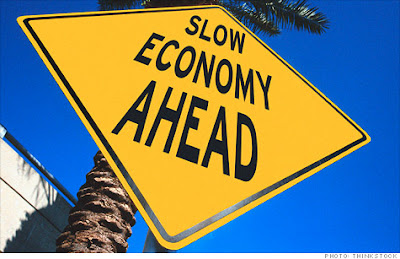 [...] ECRI is one of the more widely respected firms on economic recessions, as it has never been wrong when forecasting that a recession would start, or failed to predict a recession well before it was widely accepted.

Achuthan predicts the recession will happen even without a new shock to the economy, such as a spike in oil and gas prices or a Greek sovereign debt default sparking a financial meltdown. If those things occur, he says they will simply make an inevitable recession more painful.

In fact, Achuthan said data gathered since his September forecast only confirms his view that economic growth has slowed to such a degree that a downturn is now unavoidable, likely by late summer.

"Now that we have several months of definitive hard data, this is not a forecast," he said, pointing to key measures that don't receive as much attention from the public or many economists.

Specifically, he identifies annual growth in industrial production, real personal income and spending, as well as the year-over-year change in gross domestic product, a broad measure of the nation's economic activity. That GDP reading has been stuck between 1.5% and 1.6% growth for the last three quarters, far less encouraging that the rising quarterly GDP, which is more widely reported.

"Basically, growth has flatlined," he said.

Some might think that a new downturn would be a so-called double-dip recession, in that it comes before the economy has fully recovered from the jobs lost during the Great Recession. But Achuthan said if the economy falls into recession at this point, it would be a new recession, not a double dip, given the time that has passed since the formal end of the recession in 2009 and the economic growth since then.

He said improved consumer confidence and economists' stronger outlook are due to gains in jobs and stocks over the last six months.

The unemployment rate has fallen for five straight months, dropping to 8.3% in January compared to 9.1% in August. Filings for new jobless benefits have fallen to a nearly four-year low. And the Standard & Poor's 500 (SPX) index has gained 27% since an October low to reach the highest level since June 2008.

Even ECRI's own leading indicators have been showing steady improvement since October. But Achuthan said those readings are still recessionary.

He said the time it takes employers to increase staff means that job growth is a so-called lagging indicator, which reflects economic conditions in the past rather than pointing to future growth.

That doesn't necessarily mean the economy will start losing jobs again by this summer, when he expects the recession to start. He said hiring can continue in the early months of a downturn, but there will definitely be job losses ahead. [...]

Read the whole thing to see why. The worst part is, the obvious signs of a new recession may not start to manifest until after the November elections.