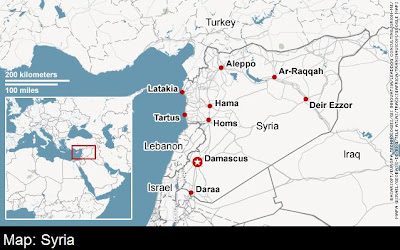 Where is Syria crisis heading?

[...] Individual states in the Arab League have called for al-Assad to step down, but the organization as a whole has failed to table a similar resolution -- and Phillips says that is unlikely to change anytime soon.

"While it seems likely there is going to be some internal negotiation (on a resolution) taking place, it certainly seems very unlikely Lebanon or Iraq -- states who are allied effectively to Iran and Syria -- will ever join calls for Assad to stand down," said Phillips.

Will the international community intervene like it did in Libya?

Nothing will happen in terms of military intervention in Syria unless Russia changes its current stance, according to Phillips.

"Russia have said quite clearly that they're not going to support anything that would risk al-Assad being forced from power," Phillips told CNN.

"If Russia gave the same kind of green light for Syria that it did for Libya, there's every possibility that you'd see military intervention, probably coming out of Turkey," Phillips said. "But Turkey have said they're highly reluctant to intervene unless they have NATO or U.N. backing."

Is the opposition united against the al-Assad regime?

The longer the fighting goes on in Syria, activists and Western diplomats say, the more radicalized the revolution is becoming.

Fringe elements of Muslim extremist groups are moving in and sectarian rifts are widening as feelings of despair descend on some flashpoint Syrian cities.

While the besieged city of Homs has traditionally been a place of religious tolerance, "there is a real sense now that that is changing and being manipulated by people on both sides" of the conflict, according to Phillips.

President al-Assad belongs to the Alawite Muslim sect while Sunni Muslims form the majority in Syria.

"The older Sunni merchant class that feel the city is theirs rightfully are now turning on the Alawites, who they see as these recent migrants that don't actually belong in the city," said Phillips.

Many Christians have fled to Damascus as communities begin to divide on sectarian lines. Salafists -- Islamic radicals, many of whom have brought terror tactics honed in neighboring Iraq -- are moving into Homs.

Hard-liners inside and outside the country are already jockeying for post-al-Assad power, while the Alawite community fears the prospect of persecution if the government falls.

"The regime is trying to persuade the Alawites that if they abandon the government, they will be wiped out in the dog-eat-dog aftermath," Phillips said.

No easy answers for this dilemma.


At U.N., Pressure Is on Russia for Refusal to Condemn Syria

[...] Fundamentally, the argument over Syria reflects a deeper divide between those who would use the Security Council to confront nations over how their governments treat civilians, versus those who consider that it has no role whatsoever in settling domestic disputes. Syria is the latest example in an argument that stretches back through all recent conflicts.

Russia, backed discreetly by China and India, rejects the idea that the world organization can interfere in the domestic politics of any country to force a leadership change. They all feel that they were duped into supporting a no-fly zone over Libya, which was promoted as a means to protect civilians last March. Instead, they said, NATO used it as a license to help overthrow the Libyan leader, Col. Muammar el-Qaddafi.

The Russian envoy, Vitaly I. Churkin, adopted a “where will it all end” argument, telling reporters that the Security Council cannot prescribe ready recipes for the outcome of a domestic political process.

“Once you start, it is difficult to stop,” he said, adding that pretty soon the Council would start pronouncing “what king needs to resign, or what prime minister needs to step down.”

To a certain extent, the Arab League and the much of the world were ready to dump the eccentric Colonel Qaddafi because he had made many enemies. Mr. Assad, despite hostile relations with some neighbors and the West, continues to have a strong ally in Russia, yet analysts described Moscow as preoccupied with leadership change.

“That the Morocco resolution ‘calls for’ Assad to step aside is their worst example and fear,” said George Lopez, a professor at the University of Notre Dame’s Kroc Institute for International Peace Studies and a sometime adviser to the United Nations. “If today it is Assad, tomorrow Putin? They worry.” [...]