$100 Laptop Computer: A Brilliant Idea, or an Expensive Mistake?

I've read several articles about this computer so far. Many people have urged that the computer be made available for sale commercially, and at a slightly higher price, with the profits used to subsidise the non-profit portion of the program. In order to keep the price low, a large volume of the units would have to be produced, and making them available commecially would help achive that, as well as provide extra income for the project.

That sounds wise to me, but for whatever reasons, that advice is being ignored, apparently. I've also read some comments by people who actually manufacture computers for a living, who state that Mr. Negroponte's plan is too ambitious to be financially viable, that he should start with a much smaller test market first, then once he is sure the product is sound, then and only then, commit to mass production in large quantities.

The idea is interesting, but I fear if business people with practical manufacturing experience are not involved, the project could become a giant sinkhole for sucking up money. I suppose we shall see... 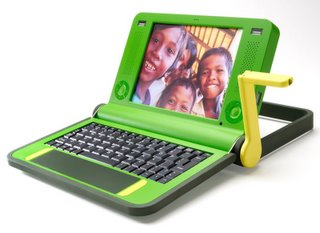 I read somewhere that they made the colors green and yellow, so that it would appeal to children, but look unattractive to theives! Here is a portion of the latest news article about this machine:

Taiwan's Quanta Computer has been selected to produce $100 Linux laptops developed at MIT, for eventual distribution to children in developing countries. Between five and 15 million units are expected to be provided to children in China, India, Brazil, Argentina, Egypt, Nigeria, Thailand, and other countries, the Lab said.

Nicholas Negroponte, head of the MIT Media Laboratory and chairman of the lab's One Laptop Per Child program, made the announcement Wednesday night via the Lab's website.

The program aims to give children computers for "a window into the world and a tool with which to think. Any previous doubt that a very-low-cost laptop could be made for education in the developing world has just gone away," the announcement said.

The computers are expected to be available for distribution in the fourth quarter of 2006, the announcement said. Between 5 million and 15 million units are expected to be provided to children in China, India, Brazil, Argentina, Egypt, Nigeria, and Thailand, and other countries.


To see the full article with a list of product features and more photos, click HERE.
Posted by Chas at 10:19 PM