The American Main Stream Media
and the Danish Cartoons 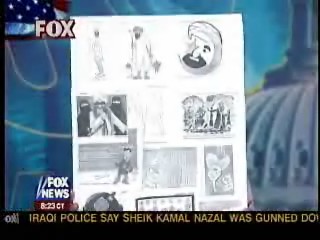 Michelle Malkin was a guest Tuesday evening on Fox News Channel's Hannity and Colmes, for a segment on the Mohammed Cartoons. She tried to show viewers all 12 cartoons to give viewers the full context of the Jyllands-Posten's decision to publish the artwork.

As she tried to walk through the content of the cartoons, the camera cut away from her display to video of the Islamists' violent protests instead. Says Michelle:

Why do they persist in leaving viewers in a cloud of ignorance about this international controversy? Cherry-picking the most arguably inflammatory cartoon--the one of Muhammad and the bomb turban--and implying that it is representative of the rest of the artwork is not journalism.

And it's exactly what the radical Islamists are counting on the cowering MSM to do.

I had a nice chat with another FOX News personality before my segment. This person hadn't seen all the cartoons--but had already formed a firm opinion that the Jyllands-Posten was being unnecessarily provocative and insensitive.

Is it any wonder that millions of people are turning to the Internet to get to the truth?

The bold emphasis was mine. WHERE is this attitude comming from?

Michelle went on to say:

There also wasn't enough time to address the other most important aspect of the Cartoon Jihad -- the fabrication of truly anti-Islam cartoons by Danish imams, who did precisely what the Jyllands-Posten is unfairly blamed for doing--that is, deliberately inciting Muslims to violence.

Here again are those bogus cartoons:

But you won't hear much, if anything at all, about this in the MSM, either.

You can see Michelle's entire post, with embedded links, HERE. 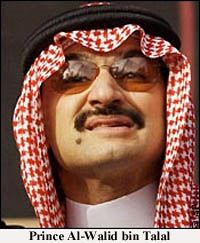 In the case of Fox News, could it have anything to do with one of it's shareholders, Saudi Prince al-Walid bin Talal? How much influence does the wealthy prince have at Fox? It seems he does have direct influence over how muslims are depicted in the news, according to this report from RogerSimon.com:

Fox News... Fair and Balanced or Fair and Bought?


There is a very interesting article about the Prince from Frontpagemag.com:

...Al-Waleed is said be the world’s fifth richest man and now NewsCorp’s fourth largest voting shareholder (behind the Murdoch family, Liberty Media and fund giant Fidelity Management & Research Co). Such a role would appear to give the Prince some say over the way the business is run. That could, presumably, extend to the content of Fox programming and that of the company’s other media outlets (which include DirecTV and 20th Century Fox).

Will Al-Waleed be a prince, and leave these American institutions alone? Or will he throw his weight around, perhaps only behind the scenes, to – let’s say – improve the sorry image his country has earned in the United States?

Mind you, public relations is not exactly something at which Al-Waleed has previously excelled. But not for want of trying.

Recall that he was the Saudi prince who made headlines after September 11th when he visited Ground Zero and offered then-New York City Mayor Rudy Giuliani a $10 million check for relief efforts.

A few days later, however, the prince released a statement that blamed the United States and its support for Israel for the devastating 9/11 attacks...

I have to wonder how many other stocks he, or other wealthy Saudis, own in the American MSN?

Hat tip to TammyBruce.com for calling attention to the link.

More lies from Danish Imams :
... Abu Laban, in fact, was first shown speaking on Danish television condemning the boycott of Danish goods (in English), then shown interviewed on al Jazeera, cheerfully commenting on the effectiveness of the boycott (in Arabic)...

Danish Imams Busted! The fake "cartoon" of a muslim with a pig snout was really a Frenchman dressed in a pig costum, as a contestant for a pig-calling competition in France! The photo was originally published as a news item by the AP.

BBC Admits Negligence They reported that the fake cartoon pictures used as propaganda to incite violence were genuine Danish cartoons. How could such a large news corporation be so sloppy in checking their facts?

THE MUHAMMAD CARTOONS BLOGBURST UNDER ATTACK
Posted by Chas at 12:01 AM