WAHHABISM; the form of Islam
that tolerates no other 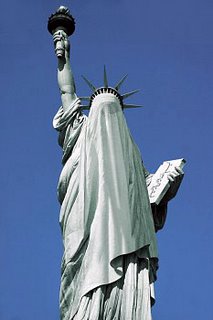 I've been wanting to write for a while now about the Wahhabi sect of Islam. It is said by many to be the most radical and intolerant sect of Islam, popular in Saudi Arabia. 15 of the 19 terrorists in the 9/11 attacks were Saudis. It's estimated that Saudi money has enabled Wahhabis to take over 70-80 percent of American mosques. Saudi money buys a great deal of influence in the USA, and much of what we hear in our MSM is the Wahhabi perspective of Islam. It is the Wahhabis that object to images of Mohammed being shown, but that view is not representative of the entire Islamic world. Yet in the Cartoon controversy, the Wahhabi view is often represented by the MSN as being the preeminent view of Muslims generally.

Wahhabism isn't just a religious sect, it has also become a political movement as well. Many Wahhabists who are frustrated with the Saudi Royal family, are supporters of Bin Laden. There are also offshoots of neo-Wahhabi or Wahhabized ideology, that share in common a political agenda.

There is an informative piece from National Review, dated November 18th, 2002, by Kathryn Jean Lopez. It's an interview with Stephen Schwartz, author of The Two Faces of Islam: The House of Sa'ud from Tradition to Terror.

I haven't read his book, but in this interview, Schwartz gives the historical details and background of Wahhabism, it's interactions with other Islamic sects and other religous faiths, and information about it's current influence abroad and here in the USA. The interview is titled "The Good & the Bad: Stephen Schwartz on Islam and Wahhabism". Here are a few excerpts:

...Unfortunately, the U.S. is the only country outside Saudi Arabia where the Islamic establishment is under Wahhabi control. Eighty percent of American mosques are Wahhabi-influenced...

The entire gamut of "official" Islamic organizations in the U.S., particularly the Council on American-Islamic Relations (CAIR) and the Islamic Society of North America (ISNA) are Wahhabi fronts. In other such groups, like the American Muslim Council (AMC) and the Muslim Students Association (MSA) Wahhabism is in crisis, because of the devastating effect of 9/11. In addition, the Wahhabis are deeply compromised by the exposure of individuals like John Walker Lindh, Richard Reid, José Padilla, and John Muhammad.

...To understand the struggle of the world's traditional Muslims against Wahhabism, you have to get away from the "Arab street" and meaningless people wandering around. You have to sit down with serious Islamic clerics and thinkers and dialogue with them in a way they understand and respect.

...I have never seen a single serious interview with an Islamic religious figure on Western television.

...As for the situation in the U.S., condemnation of Wahhabism and even of terrorism have been sparse for the following reasons:

Wahhabis (CAIR, etc.) are granted status by U.S. media as the main Islamic spokespeople. They issue ameliorative statements intended to end discussion of the problem, and they closely watch the community and prevent traditional Muslims from expressing themselves openly about Wahhabism and its involvement with terrorism. The U.S. media let them get away with this.

Most immigrant Muslims in the U.S. came to this country to get away from extremism and are horrified to see that their faith is in extremist hands here. They believed, before coming here, that the U.S. government would never permit such a thing to happen. However, their children are often indoctrinated and radicalized by extremists operating through Muslim schools, Islamic Sunday schools, and radical campus groups. That the U.S. government turned a blind idea to the Wahhabization of American Islam is deeply shocking and disturbing for them. They feel intimidated and defeated...

Some of the information in the interview may be dated, (such as crisies that were occuring at the time in 2002, but may since have changed) but the background information is static.

Mr. Schwartz is himself a Muslim convert, which influences his opinons. Some have said that his efforts to wall off Wahhabism as the sole source of Islamic extremism go too far at times. Yet there is no doubt that the Wahhabism is a powerful and influential force in the Islamic world, and Schwartz' views offer some interesting facts and insights into it that you won't here in the MSM.

You can read the complete review HERE.

Hat tip to JunkYardBlog where I got the link to this article.

There Are No Moderates: Dealing with Fundamentalist Islam (Fall 1995) An exerpt:

...a Pakistani fundamentalist group recently deemed Michael Jackson and Madonna "cultural terrorists" and called for the two Americans to be brought to trial in Pakistan. As Bernard Lewis notes, "It is the Tempter, not the Adversary, that Khomeini feared in America, the seduction and enticement of the American way of life rather than the hostility of American power." Or, in Khomeini's own words: "We are not afraid of economic sanctions or military intervention. What we are afraid of is Western universities." ...

...Modeling its activities upon those established by the left [not the least of which is the faith's near Trotskyite obsession with permanent religious revolution] CAIR wages an intense cultural assault. Hardly a day passes when multiple charges of discrimination, racism and anti-Muslim bias are not directed at American society.

CAIR is probably the most in-your-face proponent of this style of realpolitik - as ultimately threatening as the more graphic and murderous form now seemingly a part of everyday life, because its intent is a forced accommodation with Islam - on its terms - cloaked behind a lexicon of multiculturalism and diversity doublespeak...

Out Foxed(Re: CAIR meeting with representatives of the Fox television network to discuss Muslim concerns about the drama series "24.") An excerpt:

...What Fox has done here - aside from completely caving in to a group of Islamist thugs - is to totally compromise whatever amount of intellectual freedom that still might exist at the so-called conservative network. If - given the backdrop of 911, Afghanistan, Iraq, the Palestinian Intifada, beheadings, torture, Chechen female suicide bombers and the 2002 Bali nightclub attack - an entertainment show can't depict a Muslim as an active terrorist, they have set themselves up to be rolled every time some crackpot group decides to challenge them.

Additionally - and this is a sin not of ommission but commission - this move further legitimizes CAIR at a time when it is moving into American schools - welcomed by multiculturalist fools - under the guise of interfaith outreach, with the intent of convincing children that Islam means them no harm and that something must have gone very terribly wrong at the White House for engaging in a war against the "non-existent" threat of Islamic terror...
Posted by Chas at 12:40 AM

I don't usually go on so much about Muslim related issues, but it seems there is so much lately that the MSM is just not addressing, and it's something I've been reading a lot about lately.

I visited your blog, and you've got some interesting things there. In my next installment of Sunday Funnies, I think I will link to your post about the public bathroom in Switzerland. Definitely freaky, but funny and unusual, too.