The Nazi roots of the Muslim Brotherhood 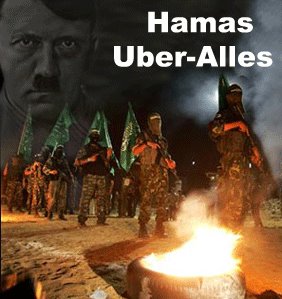 This is a topic that really needs to be talked about more. I've been wanting to write about it, having learned quite a bit about it from Paul Berman's book, Terror and Liberalism (H.T. to Scott at the blog Demosophia, who told me about the book years ago).

Recently I found a good article at Frontpagemagazine.com, that gives a good background of the historical connections between Nazism and radical muslims groups like The Muslim Brotherhood and Hamas. An excerpt:

...As described in its Charter (or Covenant), Hamas is the “Palestinian branch of the Muslim Brotherhood,” the movement known as “al-Ikhwan al-Muslemeen.” The “Brotherhood” was founded in Egypt in 1928 by the Islamic ideologue Hassan al-Banna (grandfather of today’s controversial Islamic activist Tariq Ramadan). His cornerstone assertion was that true Islam had been diluted and betrayed by Moslem politicians truckling to the West, and that the only way to set Islam back on a true path was to violently replace these traitorous Moslem politicians with true Islamic leaders who would make the Qur’an their nations’ constitutions and Shari’a their civil law. Ultimately, once the trans-national population of Moslems, known as the “umma” (the nation), was under the leadership of right-thinking religious Moslems who eschewed westernization and modernization, the whole concept of nation-states would dissolve and the Moslem “umma” would be united, from Mauritania to India, from Turkey to Yemen, and from Pakistan to Somalia, under one Islamic religious Caliphate.

In short, Hassan al-Banna wanted to take the Moslem world back to the 8th century, and use violence and murder, terrorism and assassination to do so. In the context of this Armageddon-type confrontation between a neo-Caliphate and modern Moslem states, al-Banna saw the Jews of the world (there was not yet a state of Israel) as a major enemy of diabolic proportions. He quoted Mohammed’s extra-Qur’anic teaching that the world would know ultimate redemption, and the resurrection of the dead, only when the Moslems had succeeded in annihilating all of world Jewry, or converting them to Islam. His words would later appear in the Hamas Covenant.

Al-Banna’s disciple was an eloquent writer and preacher, Sayd Qutb. Qutb lived for a bit more than a year in the United States, traveling and acquainting himself with American culture and social mores. His response to democracy and freedom was one of shock and horror. His writings, which lay the groundwork for modern “brotherhood” preaching, regard Western civilization in general, and the USA in particular, as manifestations of demonic licentiousness and sinful hubris. The Brotherhood’s goal must be the destruction of this ungodly and perverse society.

The Brotherhood quickly attracted to its ranks both those predisposed to violence and those for whom violence was only a means to restoring Allah’s will on earth, first with errant Moslem nations, and then with the nations that represented leadership in “global un-belief.” End-of-days rhetoric with apocalyptic prophesies, coupled with training and action in violent attacks on politicians, opposition religious leaders, and civilians, proved effective in drawing into its fold many thousands of followers.

By the late 1930s, Nazi Germany had established contacts with the Brotherhood, and the Haj Amin el-Husseini, father of Palestinian nationalism, was a close collaborator with Hitler. Not surprisingly, the Brotherhood adopted fascist trappings, language and symbolism. In fact, Sayd Qutb’s book “Our Struggle with the Jews” is reminiscent of Hitler’s Mein Kampf. Qutb simply changed the players. Instead of being the eternal enemy of the “Aryan race,” the Jews, in the perception of the Brotherhood, became the eternal enemy of Islam. His central theme was the Jews’ use of Christianity, capitalism and communism as weapons in their war to subvert Islam. Moreover, he re-interpreted history such that the Jews could be blamed for everything from the French revolution to Marxism, materialism, sexual depravity, World War I, World War II, and global poverty...

This article makes excellent reading for anyone who wants to better understand the fascist underpinnings driving radical Islam today. You can read the whole article here:

The NAZI's and Hamas, radical Islam, radical Muslims.. Whatever name you want to call them, all it boils down to is, same shit, different day...

They are all totalitarian facist movements. But Radical Islam has an important distinction. It is so intertwined with Islam, that it is passing itself off as a religion. It needs to be treated like the totalitarian political movement it is.

I've never been here before, but I have to tell you I am very impressed with your blog and this post. So, according to this, we are actually fighting Nazi dogma all over again. Good grief!

Thank you Chas. I'm going to link you. I am blown away by this post!
I will also do some research on this and read your reference link. If I post about it, I promise to leave a link back to you.

BTW: I came over here because of PatC.

"totalitarian political movement" almost seems too kind to describe these cold blooded assassins..but I guess that what totalitarinism is eh?..xcellent research Chas.
Thumbs UP.

I know what you mean about "totalitarian political movement" being too kind, I was thinking, it sounds so polite, it makes it sound like a legitimate political entity. I think I was using the word political to try to distinguish it from a strictly RELIGIOUS movement, which is what the MSM keeps saying it is.

In truth, it's probably more accurately described as a hybrid, a facist political movement that feeds off a particlarly totalitarian interpretation of the Muslim religion. As such, I think if forfeits the right to be treated as a religion.

If a Neo Nazi "Church of the White Supremisist" demanded respect, OR ELSE, I doubt we would be caving into it's demands. I see no reason to cave into the demands of facist Muslims, either. Seeing no resistance, they will just keep demanding more...

This is something that very few people understand: that the West and the US have been a target for nearly a century, and that it ain't our fault!

Just try talking history to them tho... the ONLY history that is important to the closed, bigoted, racist minds of the Left, is the past errors of the US (or the Crusaders).