ISLAM; Religion of Peace, or Pieces?

We are continually told by the MSM that Islam is a religion of peace, even as many of it's adherents smash and break things to pieces, and hack people into pieces. We are told by Muslim rioters AND by our MSM that we must RESPECT Islam; therefore, we must not show cartoons or discuss things that offend; WE need to demonstrate good manners, taste, and self-restraint. 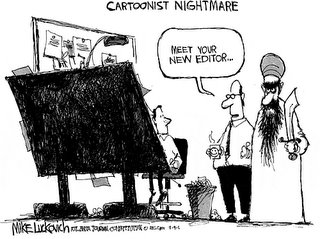 What a lot of patronizing, self-serving twaddle! I like to think that most of us don't need such instruction. After all, it's EASY to respect a religion of peace. Let these militant groups start to DEMONSTRATE that they are practicing one, or be treated like the POLITICAL totalitarian fascists that they are.

If the peace of Islam is in pieces, then they need to sort it out. If they want the PRIVILEDGE of being respected as a peaceful religion, it has to be earned. They can start by separating the political pieces of Islam from the religous ones, and start behaving like civilized people. We should be INSISTING on it, and not letting anyone tell us otherwise.

Here are two articles written by people who aren't afraid to ask real questions and to say what needs to be said:

Stand up for Denmark!
Why are we not defending our ally?
By Christopher Hitchens. An excerpt:

...The incredible thing about the ongoing Kristallnacht against Denmark (and in some places, against the embassies and citizens of any Scandinavian or even European Union nation) is that it has resulted in, not opprobrium for the religion that perpetrates and excuses it, but increased respectability! A small democratic country with an open society, a system of confessional pluralism, and a free press has been subjected to a fantastic, incredible, organized campaign of lies and hatred and violence, extending to one of the gravest imaginable breaches of international law and civility: the violation of diplomatic immunity. And nobody in authority can be found to state the obvious and the necessary—that we stand with the Danes against this defamation and blackmail and sabotage. Instead, all compassion and concern is apparently to be expended upon those who lit the powder trail, and who yell and scream for joy as the embassies of democracies are put to the torch in the capital cities of miserable, fly-blown dictatorships. Let's be sure we haven't hurt the vandals' feelings...

You can read the whole thing HERE.


Nonsense and sensibility
by Diana West. An excerpt:

...In another context, I wouldn't disagree with the readers' comments I quoted above. Indeed, I've been known to make similar arguments against all manner of fetid cultural excess, from lurid children's fiction to the notorious Sensation Exhibition at the Brooklyn Museum in which Dung Virgin first came to fame in 1999. (Or was that infamy? It's easy to get them confused.)

The topic of Dung Virgin, not to mention its companion piece in shock value, Piss Christ, strikes the Good-Mannerists as an important marker in their personal guides to press etiquette. Not grooving to such "artistic" attacks on Christianity, the Good-Mannerists say they can understand the consternation of the Cartoon Ragers -- at least to some point shy of death threats, arson and murder -- and see media self-censorship as a matter of common decency.

Is the comparison valid? And is the politeness deserved? Absolutely not, and here's one big reason why: Christianity and Islam are not interchangeable belief systems inspired by a generic divinity. One relevant distinction is the way they operate in relation to their societies. Christianity abides by the separation of church and state; Islam knows no separation whatsoever. As a result, the theological teachings of Islam as revealed by Muhammad, which form the basis of the Islamic law (sharia) that drives Islamic societies, necessarily belong to the political sphere in a way that Christianity does not.

This is not to say that Christianity should be, or has been, off the table. Indeed, all the ink (not blood) spilled over assorted Excrement Icons only enhanced their value, not to mention the reputations of their artists (using the word loosely). But the all-encompassing nature of Islam underscores a special need for open, critical examination of the Koran and Muhammad as political, and politically violent, forces that roil our times...

(bold emphasis mine) You can read the whole article HERE.
Posted by Chas at 12:33 AM