Ahmadinejad's beliefs:
the destruction of Israel, world chaos, the return of the Mahdi and global Islamic theocratic rule 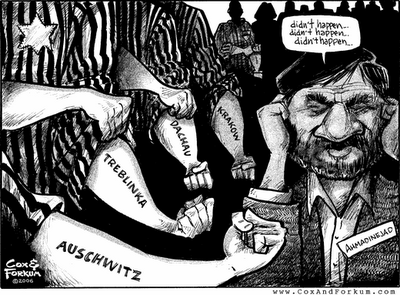 Those nice "folks" in the Iranian government are having a Holocaust Cartoon Exhibit. And why not? No need to worry about offending jews, when you have already stated in public repeatedly that you want to wipe them off the face of the earth, as Iran's president has.

Yad Vashem on Tuesday deplored the "alarming silence" of most of the world in the face of repeated Iranian genocidal threats against the Israel, warning that the Islamic republic represents a danger to all enlightened nations.

"The alarming silence of the world indicates that the West has not yet understood that what is taking place is an attack on Western values and civilization," said Yad Vashem Chairman Avner Shalev.

"History has demonstrated that silence in the face of evil statements begets evil actions," he added. 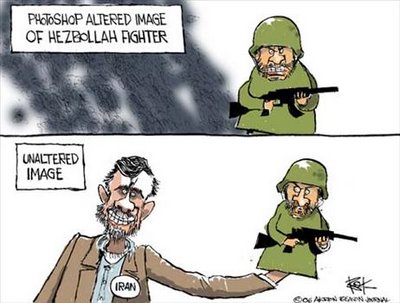 Iran's president Mahmoud Ahmadinejad has made a lot of statements that have been met by silence. He also talks about his strange religious beliefs, which motivates him, but they aren't talked about much in the MSM. Here are some links to articles about his beliefs:

...When an aircraft crashed in Teheran last month, killing 108 people, Mr Ahmadinejad promised an investigation. But he also thanked the dead, saying: "What is important is that they have shown the way to martyrdom which we must follow."

The most remarkable aspect of Mr Ahmadinejad's piety is his devotion to the Hidden Imam, the Messiah-like figure of Shia Islam, and the president's belief that his government must prepare the country for his return.

One of the first acts of Mr Ahmadinejad's government was to donate about £10 million to the Jamkaran mosque, a popular pilgrimage site where the pious come to drop messages to the Hidden Imam into a holy well.

All streams of Islam believe in a divine saviour, known as the Mahdi, who will appear at the End of Days. A common rumour - denied by the government but widely believed - is that Mr Ahmadinejad and his cabinet have signed a "contract" pledging themselves to work for the return of the Mahdi and sent it to Jamkaran.

Iran's dominant "Twelver" sect believes this will be Mohammed ibn Hasan, regarded as the 12th Imam, or righteous descendant of the Prophet Mohammad.

He is said to have gone into "occlusion" in the ninth century, at the age of five. His return will be preceded by cosmic chaos, war and bloodshed. After a cataclysmic confrontation with evil and darkness, the Mahdi will lead the world to an era of universal peace.

This is similar to the Christian vision of the Apocalypse. Indeed, the Hidden Imam is expected to return in the company of Jesus.

Mr Ahmadinejad appears to believe that these events are close at hand and that ordinary mortals can influence the divine timetable.

The prospect of such a man obtaining nuclear weapons is worrying. The unspoken question is this: is Mr Ahmadinejad now tempting a clash with the West because he feels safe in the belief of the imminent return of the Hidden Imam? Worse, might he be trying to provoke chaos in the hope of hastening his reappearance?...

People drop messages to the Mahdi down the holy well, because they believe the Mahdi disappeared in A.D. 941, down the well at age 5, and is waiting to return. This would seem to imply they believe he is somehow still down there... reading their messages?

And that comment about the airplane crash victims dying showing the way to martydom that the Iranian people must follow... I suppose it's not really suprising, when you consider that even the students in Iran's state schools are taught to prepare for death by martyrdom. Can you say "death cult"?


The return of the Mahdi

...Shiite Muslims believe that the Twelfth Imam disappeared down a well near Jamkaran in A.D. 941, and will emerge from this location at his Second Coming. But first, they believe, the world will go through great calamities and upheavals. This "apocalypse" will set the conditions for the Mahdi's return...

...Ahmadinejad has taken up the banner of the Hidden Imam. His hate-filled rhetoric aimed at the Jews and America is stirring fanatical Muslims the world over...

...As days pass, Ahmadinejad becomes more defiant. It is as if he is daring the nations of the world to try to stop him. How far will he go? Will he, indeed, launch a murderous attack against Israel or the United States in a misguided attempt to see his dream of the return of the Hidden Imam come to fruition?...

This article has more details about the Mahdi, Shia hsitory and beliefs, and how they relate to Ahmadinejad.

Iran leader: Islam to 'rule the world'
Urges Muslims to get ready for coming of 'messiah'

Islam must prepare to rule the world, Iranian President Mahmoud Ahmadinejad told a crowd of theological students in Iran's holy city of Qom, according to a report.

"We must believe in the fact that Islam is not confined to geographical borders, ethnic groups and nations. It's a universal ideology that leads the world to justice," Ahmadinejad said Jan. 5...

...Ahmadinejad is urging Iranians to prepare for the coming of the Mahdi by turning the country into a mighty and advanced Islamic society and by avoiding the corruption and excesses of the West. 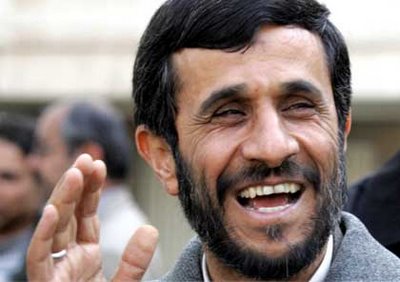 What the relevant Mid-East despots are saying:

* Speaking at a Tehran conference on the subject of "The World without Zionism": "The establishment of the Zionist regime was a move by the world oppressor against the Islamic world...The skirmishes in the occupied land are part of a war of destiny. The outcome of hundreds of years of war will be defined in Palestinian land...As the Imam said, Israel must be wiped off the map."
* "The fact is that Israel can ultimately not continue its existence."
* "We ask the West to remove what they created sixty years ago and if they do not listen to our recommendations, then the Palestinian nation and other nations will eventually do this for them. Do the removal of Israel before it is too late and save yourself from the fury of regional nations."
* "The real Holocaust is what is happening in Palestine where the Zionists avail themselves of the fairy tale of Holocaust as blackmail and justification for killing children and women and making innocent people homeless."
* "Israel is a rotten, dried tree that will be annihilated in one storm."

(All bold emphasis mine) I read somewhere that only 20% of Iranians literally believe in the Mahdi. Apparently Ahmadinejad is one of them. So how did such a president get elected?

Ahmadinejad was miraculously elected president, even though opinion poles at one point showed he only had the support of 1% of the electorate. Hmmm, that is quite a "miracle".

Factor in too, that all political parties and candidates in Iran must be approved by the ruling Muslim clerics. This is why Iran is not widely accepted as a legitimate democracy; all the candidates are hand picked by the Mullahs. Ahmadinejad is their puppet.

So here we have an Iranian President, who aspires to posses nuclear weapons, who believes in the destruction of Israel, Global theocratic Islamic rule, and that a 5 year old child who vanished down a well near Jamkaran, Iran, in A.D. 941 is going to return in the End of Days, amid global chaos, to lead the world to victory in a global Jihad, and that his people need to prepare to die as martyrs to this cause, because that is the reason for their existance.

Gee, and to think I was worried that he might be irrational or something. What a relief.

Mike Wallace said about Ahmadinejad after a recent interview with him: "He's obviously smart as hell." Yeah, brilliant. Who could deny it?

Mel Gibson is a Jew-hater, but the president of Iran is not?!
It is ridiculous to the point of absurdity, the way the MSM keeps going on, and on, and ON, about Mel Gibson's anti-semitism, while completely ignoring the DEADLY anti-semitism of Ahmadinejad. The Iranian president is clearly the Elephant sitting in the room, that nobody in the MSM wants to acknowlege.

No one is listening. Keep praying, time is short. Great article. I understand your frustration...it seems the whole world has gone crazy! Melinda