What could be more upsetting? Seriously? 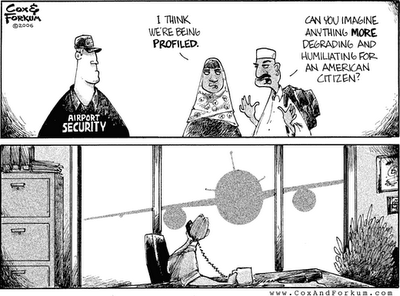 "The price to pay for racial profiling is too high," Dennis Parker of the American Civil Liberties Union told a news conference. "All people should be treated in the same way regardless of their race, their ethnicity or their religion." ...

Well yes, I really CAN think of something more degrading and humiliating for an American citizen to go through... 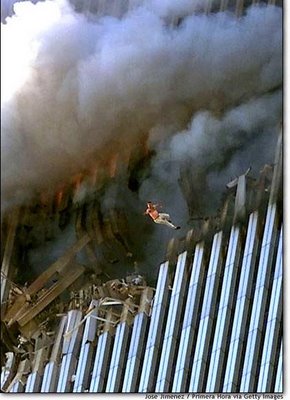 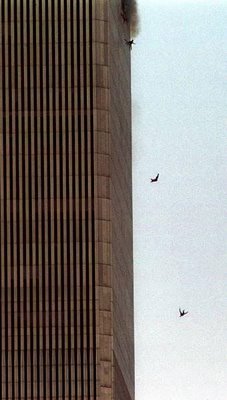 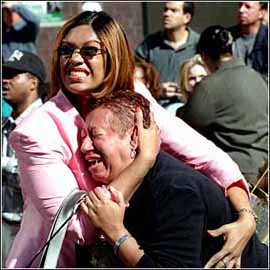 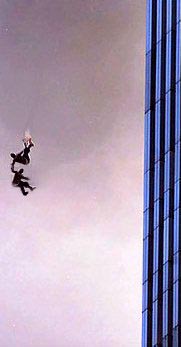 The idea is simple, but powerful: have a special tribute for each victim of 9/11, with each tribute being created by a different blogger. We started 2,996 Project to coordinate the creation of the tributes, and that's what this site is all about. Here you can sign up to make a tribute yourself, on your blog (we'll randomly assign a victim to you). You can also browse or search through either the victims that have already been assigned, or those that have not -- and you can get pointers to more information on all of them...

I will be paying tribute to Lorraine D. Antiqua, age 32.

Last I checked, there were 258 names still waiting for to be assigned. If you feel at all motivated, please look into it.

Racial Profiling? Breaking a Taboo
An excerpt (a quote within the article, of Jonah Golberg of the Chicago Tribune):

[R]oughly 99 percent of jihadi terrorists are of either Middle Eastern or South Asian descent and 100 percent of them are Muslim. Critics of racial profiling say that it wouldn’t have stopped Richard Reid (the shoe bomber) or Timothy McVeigh (the Oklahoma City bomber). This is a red herring. Nobody ever proposed that race should be the only factor [in scrutinizing airline passingers], or even the most important factor. But why can’t it be one of those 30-plus factors? [...]

The terrorists we’re looking for are overwhelmingly young male Muslims from places such as Pakistan and Saudi Arabia. Why is it morally superior to inconvenience old Mormon women of Swedish descent – for no reason at all – as much as young men from Pakistan?

Two alleged members of the British liquid explosives plot were young men of British descent who converted to Islam, and one was a woman with a child. Only a fool would advocate a system that, as a rule, deliberately excludes such people from scrutiny. But isn’t it equally foolish to spend vast sums on machines designed to interpret the facial twitches and sweat glands of millions of passengers out of an irrational phobia of racial profiling?

(bold emphasis mine) A good argument can be made that racial profiling by itself is almost as inefficient and wasteful as random searches. The Israelies and other countries overseas do something called Behavior Profiling, which would make more sense. Efforts are being made to expand it's use here, but it's being fought by the ACLU.
Posted by Chas at 12:14 AM

"Well yes, I really CAN think of something more degrading and humiliating for an American citizen to go through.."

Are you referring to you using their dying moments as propaganda for racial profiling? Cause I think that's possibly more degrading, yeah.

Sask"boy" said:
Are you referring to you using their dying moments as propaganda for racial profiling? Cause I think that's possibly more degrading, yeah.

More degrading than ... splatting on a sidewalk? We could ask them what they think, only... they're dead.

If you are so offended by racial profiling, you might have offered some intelligent reasons why (even I can think of some), but you didn't bother. Nor do you even use a real name. What you are doing is anonymous posturing; it's really boring to grown ups. It's also called "trolling". Even in Canada. Kindly waste somebody elses time.

I remember when American passports noted which religion their bearer practiced. Most contries still do this.

Dragging American troops through the streets in Somalia is BY FAR more humiliating than profiling. We are not talking about driving while black, but people that are from countries that sponsor terrorism. Even better than that would be the Behavior profiling would be the most appropiate and best way to go.

Murder has to be the ultimate form of human humiliation and degradation. Thomas Sowell addresses this in his article:

Point of No Return?

He's very blunt about who and what we are up against. It amazes me how many people still have their heads in the sand, and can't see that we need to adapt - quickly - to the world the way it is, and not keep clinging to illusions about the world the way we imagined it was.