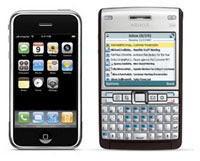 The more I read about the iPhone, the more I wonder about all the hype. While the iPhone does have some interesting features, there do seem to be limitations and drawbacks, that other cell phones don't have. Is it a good deal for the money?

One of the most interesting comparisons I've read is a comparison with the Nokia e61i. Michael Robertson at the Michael's Minute blog goes into a detailed comparison of not only features of the two phones, but uses and available service options.

Battle of the Buttons - Will the iPhone Succeed?

[...] On the Nokia e61i there are buttons for nearly every major function.

The Nokia e61i includes a full qwerty keyboard, similar to the Palm Treo and RIM Blackberry, making it practical to type a lot of data. Admittedly, I have not used an iPhone touch screen keyboard, but I have used other touch screen keyboards. They are slow and laborious and nearly impossible to type rapid fire, as people expect with instant messaging. The touchscreen fails as a volume input device - any Blackberry or Treo user can attest to this. Without a keyboard, the iPhone will be a one way street. It will be useful for viewing and reading information, but not for transmitting.

"...You can't use Wi-Fi to download music, update your calendar or address book because Apple wants to keep you locked-in with iTunes."

Is button switching better than a touch screen for overall navigation? Apple's iPhone certainly has a wow factor but also has carefully crafted demos.

I'm not convinced the touch screen is practical for all phone users. Performing sweeping finger gestures, pinching or sliding the toolbar generally requires two hands - removing the ability for one hand operation such as I often do while moving around or carrying a drink. Look closely at the video or TV ads and you'll see two hands cradling the phone or the phone magically suspended so just one hand is required. I often pick up a phone and operate it with an available thumb on the same hand that will be difficult, if not impossible with the iPhone. Additionally, putting your fingers on the screen for navigation, as well as leaning your face against it for phone conversation, will leave the screen covered with dirt and oil.

There's an even greater reason I admire my Nokia e61i over an Apple iPhone. Today, American phone customers are held hostage by carriers that dictate what phones they can buy, what software they can run and what networks they can use. Carriers use this control to charge over-sized fees for many services and trap customers into costly service plans. SMS is a racket. Roaming fees are outrageous. God help you if you go over your minutes-per-month allotment because your bill could be hundreds or even thousands of dollars. Rather than break this cycle, the iPhone extends it by adding Apple's limitations to those of AT&T.

On the iPhone you can't use a music file to set a ringtone because AT&T wants to keep selling $2.99 ringtones. You can't use Wi-Fi to download music, update your calendar or address book because Apple wants to keep you locked-in with iTunes. What's the point of having Wi-Fi if you are still chained to the PC to access your data? Forget about using VOIP to make inexpensive calls to bypass AT&T's charges because that's turned off. Want to use instant messaging to avoid 15 cents per message SMS fees? Forget about it. The device comes with no IM software and there's no way to add any software. [...]

I would really hate to pay $600 bucks for a device like the iPhone, and then discover that I am "locked" into all these features and services that can't be changed. I prefer options and choices.

The article goes on to compare wi-fi; the iPhone's wi-fi features are crippled, apparently. And then there is instant messaging - you can add software to the Nokia, but not the iPhone:

[...] Neither the iPhone or the e61i come with instant messaging software, which I consider an essential communications need. With one click I added Gizmo software to my e61i and could then communicate with Gizmo, AIM, and MSN users (Yahoo coming soon). [Note: I'm CEO of SIPphone, which makes Gizmo Project.]

Both devices have Wi-Fi, but iPhone cripples its implementation so it's limited to certain activities. This is not so on the Nokia e61i. Nokia's Wi-Fi is truly open Wi-Fi that I can use to download music, IM, and make VOIP calls - any activity. This is the way it should be. The owner should decide when to use Wi-Fi, not the vendor. [...]

He says some good things about the iPhone too. But depending on what you need it for, you might be better of with a Nokia or something else. The article has more photos and a good feature comparison chart. If you are thinking of getting an iPhone, it's worth reading the whole of this article first.
Posted by Chas at 10:07 PM

He does mention that he has not used an iPhone. Just with that statement everything he said, based on others similar gadgets, is completely incorrect. You need to see one, feel one, and use one to be able to comment on the iPhone, otherwise it is just “Bla, bla, bla”.

The iPhone does have some improvement to make, but they are related to software enhancement—hopefully coming via software updates to the iPhone.

Let’s talk about the keyboard. It’s a keyboard! You can type just like a regular keyboard, even with your thumbs, and one handed. If you are a Blackberry Thumb Crazy, well you just need to learn how to type with the iPhone—in no time you will be iPhone Crazy Fingers. Before the Blackberry keyboards there were other types of phone keyboards, and new ones are coming out basically in every phone or, gadget for that matter. But what people are afraid is to change—try it before you write about it! And take your time to learn it and trust it! Don’t be afraid!

Like I said, you can use the iPhone with one hand. You don’t need to pinch the screen and expand your fingers to zoom out; just tap the screen and the image or browser expands.

The optical glass is amazing. I was also concerned with the smudges but when the iPhone turns on, whatever finger print is visible disappears—not like magic or a nanobot comes out from the Home button and wipes the screen. You simply don’t see it!

It is a great product with great technology and beautiful, and the beginning of new things to come. Something everyone is overlooking. Steve Jobs is doing what everyone else is afraid to do—Thinking ahead into the future!!!

He was speculating; not much more that most of us can do until the iPhone circulates more widely. He admits it's not a hands-on review, so you have to take it as such.

What he said about touch screens generally rings true to my experience. So I would have to wonder too, if the iPhone has somehow improved on this. I think it's a legitimate question; those of you who have iPhones already can tell us all about it. :)

He also brought up some other concerns; I suspect that they would be important or not, depending on what your needs are.

At the end of his article, there is a poll where you can vote on it. The selections are "AGREE", "DISAGREE" or "MIXED". You might want to let him know what you think.

Thanks for your comments here. I'm not looking to buy a phone right now, but the technology is interesting, and I'm curious if people will continue to be as enthusiastic about their iPhones after they have used them for awhile.

I have the iPhone, actually I'm creating this post via my iPhone.

Apple did indeed improved on the touch screen technology, well the company that made it for them. Try to find someone that has one and play with it. You'll see what I mean.

Like I said before, Apple needs to make some enhancements to the applications. Example, SMS only allows to text to one person at a time--so if you want to send the same message to all your friends, you'll have to do it one by one.

The Internet is amazing, I don't use my PC or iMac to check email. My phone let's me know when I have emails-simple and faster.

have the iPhone, actually I'm creating this post via my iPhone.

Apple did indeed improved on the touch screen technology, well the company that made it for them. Try to find someone that has one and play with it. You'll see what I mean.

That's great news about the touch pad technology. Hopefully that will spread to other devices, too. I look forward to seeing an iPhone one day, but that probably won't be any time soon. I live out in the boondocks, and there is no AT&T cell phone service here. I'm just going to have to rely on 2nd had reports from folks like you. :)