Shortwave Radio Nostalgia for a Sunday

In my reading about Ham Radio topics, there are often articles about well known Ham Operators who have passed away. "SK" (for "silent key") is added to the end of their call sign, to show that they are no longer with us. One recent silent key was Harry Helms, who was also a writer and author of several books: 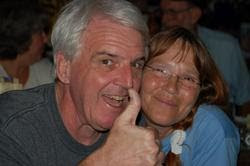 After a long bout with cancer, Harry Helms, W5HLH (ex-AA6FW), passed away Sunday, November 15. He was 57. Known for his witticism and geniality, Helms was known for his many books -- such as Shortwave Listening Guidebook: The Complete Guide to Hearing the World, All About Ham Radio, How to Tune the Secret Short Wave Spectrum and Handbook of Radio Communications Servicing and Maintenance -- and his monthly column "You Should Know: Interesting Thoughts and Ideas for Enjoying the Hobby" in Popular Communications. [...]

It continues on about his life and the things he wrote about. There's a link to his blog, where I found this post about Shortwave listening:

I have trouble sleeping through the night these days (it’s normal for late Stage IV cancer patients). I often find myself awake two or three times during the night, sometimes for more than an hour. Until I get sleepy again, I grab the Eton E5 portable shortwave radio I keep on my nightstand, put on headphones so I won’t disturb Di, and tune around to see what I can hear.

Why do I do that instead of, for example, listening to my iPod?

Since 1963, I’ve been obsessed with snagging all manner of “non-standard” radio signals. Those include AM and FM broadcast stations from hundreds and thousands of miles away, shortwave broadcasts from foreign countries, communications from ships and airplanes traveling around the globe, military transmissions, ham radio operators-----if it can be tuned on a shortwave radio receiver, I want to hear it. I’ve owned over three dozen different shortwave radios (some of which cost over $1000), numerous accessories (like antenna tuners and audio filters), and specialized antennas (like amplified loops for receiving distant AM band stations). I’ve belonged to numerous radio listening clubs. The first books I wrote were about shortwave listening.

Again, why?? What is it that keeps me searching the airwaves for something distant and unusual?

Part of it is pure nostalgia. Unless you were of sentient age in 1963, you can’t imagine how constricted the flow of information was and how distant the rest of the world seemed back then. The internet was just a theoretical concept and communications satellites were in their infancy. Video of events in foreign nations had to be flown into the United States for broadcast, and magazines and newspapers from outside the United States took weeks to arrive via ship mail. Trying to be aware of the outside world back then was frustrating, like trying to figure out what was going on in a room by peeking through the keyhole.

I wrote in the introduction to my Shortwave Listening Guidebook that I considered my first shortwave radio to be a “magic box.” And indeed it was. Strange languages and exotic music gushed from the speaker of my simple Hallicrafters radio. Cities like Moscow, London, Quito, Melbourne, and Tokyo were in my bedroom with me. I eavesdropped on ship-to-shore telephone calls and communications from airplanes flying routes across the Atlantic. And there were also the dits and dahs of Morse code, the “beedle-beedle” of radioteletype stations, and all sorts of other bewildering noises. I even found myself entranced by station WWV, then in Maryland, and its precise time signals, one beep exactly each second.

When I got my first shortwave radio, it was like that moment in The Wizard of Oz when the movie abruptly changes from black and white to color; the world suddenly seemed smaller and more real to me. I couldn’t visit all those distant foreign places, but they could visit me. And I still get that feeling after 45 years of shortwave. Even though my world is media saturated, with the internet and 150 TV channels available to me, there remains something special about connecting to a distant place via shortwave radio.

Another attraction is the “DXing” aspect of radio. DXing is the art of trying to receive rarely-heard stations on various frequencies. To those not interested in DXing, this must seem like a ridiculous activity, and I suppose it is. But I get a feeling of accomplishment bordering on exhilaration when I manage to identify a weak, unusual radio signal through heavy interference. Maybe the best analogy I can make is to fishing. You never know what’s going to happen when you cast a line into the water, and you never what you’ll hear when you turn the dial of a shortwave radio. Whenever I hear a faint signal barely above the background noise, I am almost forced to stop and try to identify it. It’s as if the station is keeping a secret from me----its identity----and I want to learn that secret. To solve the mystery, I have to battle fading, interference, noise, and distortion. My shortwave radio becomes like a musical instrument in my hands. By manipulating its tuning knob and controls, I can coax weak signals to become more intelligible and, when the gods of the ionosphere cooperate, those faint signals will yield their secrets to me and I am briefly, almost mystically, connected to some distant place. My desire for connections to distant places was probably my biggest motivation for getting a ham radio license. [...]

There's more. There's a whole lot more on his blog, about his ongoing health struggles, and commentary on various other topics. He was a writer who enjoyed writing. His last blog entry, his farewell, was very moving.

My condolences to his wife and family.

Radio Communications in a Changing World
A prior post, about my own nostalgia for the shortwave radio of my youth.