Will Republicans make gains by default? Or... 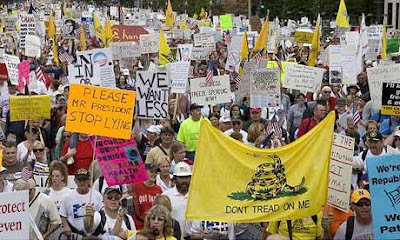 Obama's vanishing majority
The 2008 election didn't exile Republicans to the political wilderness. Today, the party has already started its comeback

[...] But the American people did not love the Democrats. They merely loathed the Republicans, who had given them (if I may quote myself): "War, Wall Street jitters, wage stagnation and, above all, W". If the Democrats did not understand this basic fact, I predicted, they would soon have problems of their own.

Two years ago, the Republican base was dispirited, the Democratic base was vacillating between energetic and enraged and the GOP couldn't buy independent votes with a bridge to nowhere. It's early, but things are starting to trend in the opposite direction. Angry conservatives are mobilised, liberals are starting to wonder where their Hope and Change went and swing voters are inching ever so slightly to the right.

According to a recent Gallup poll, self-described conservatives once again outnumber moderates after being at parity with them from 2005-2008. The increase is entirely based on a six-point increase in the number of independents adopting the conservative label, which they disdained under Bush. On a number of issues, independents are moving closer to agreement with a majority of Republicans rather than a majority of Democrats. As I write, it looks like the Republicans will win at least one of the 2009 gubernatorial races in independent-heavy states that had recently been favouring Democrats, and they may well win both.

Independents are a pragmatic lot. Just as they disliked the Bush Republicans' incompetence, bellicosity and inability to say anything coherent about the country's most pressing problems, they now dislike the Obama Democrats' stimulus plans that don't stimulate, massive expenditures of money the federal government doesn't have and general fondness for the sound of the president's voice. [...]

But it goes on to say the Republicans still lack a unified message on healthcare and consistancy in fiscal policy.

Those things are fixable. We'd best get to work on fixing them. We have to be more than just the party that says "no" to whatever the Democrats are doing.

The first key votes of the Obama era take place this week, not on the floor of the House or Senate, where health-care legislation still languishes, but in Virginia, New Jersey and northern New York state, where President Obama's endorsements of threatened Democratic candidates will test his political clout a year after his own election. [...]

But Tuesday's voting is merely the curtain-raiser to a full year of headlined Senate and statehouse races that will go a long way toward defining the landscape of Obama's political future. The gubernatorial battles especially will be worth watching.

It is there that Republicans have their best opportunity to find the missing leadership that now allows Democrats to characterize them as "the party of no," and the GOP has recruited potentially powerful challengers in such states as Massachusetts, New York, Pennsylvania, Ohio, Michigan, Illinois, Iowa, Colorado and Tennessee. [...]

Read the whole thing for the details about tomorrows elections.