Have you seen the Google Chrome for Linux beta?

Linux enthusiasts that I've known use a variety of browsers including Konqueror, Opera, and others. Without question, Firefox is today's premier Linux browser. With all these choices, why would you even consider using something new?

I installed the 64-bit Linux version on my tried-and-true Asus notebook, running Xubuntu. On my machine I read and agreed to the licensing agreement, then downloaded the file. After downloading, I opened the resulting Deb file with the default GDebi package installer. The installer ran through its paces and after completion, I found a new Google Chrome item in the Xubuntu Applications -> Network menu. A quick click put me into the browser.

Let me tell you that Chrome is fast. The startup page was rendered before the Compiz-fueled spinning window was even fully opened on my desktop. And that is on a high-performance notebook.

As you would expect, Chrome has the standard features of all mainstream browsers, including tabs, history, and themes. The task bar is utilitarian and basic, without any extra text boxes, dropdowns, or buttons (see Figure 1). [...] 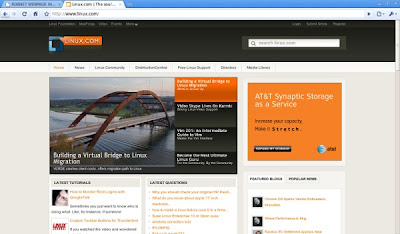 The wait is over: Google has finally brought out a version of its Chrome browser for Mac and Linux operating systems.

The beta browsers, announced yesterday, are a version of Chrome that had previously been available only as a developer preview.

The Mac and Linux Chrome browsers are expected to graduate to the next level of maturity, "stable", on 12 January. [...]

It will be interesting to watch this evolve. Firefox may have some real competition.