Here are some jokes I got in my email:

A Slow Day in Texas

It's a slow day in the little Texas town of Port O'Connor. The sun is beating down, and the streets are deserted. Times are tough, everybody is in debt, and everybody lives on credit.

On this particular day a rich tourist from back east is driving through. He stops at the motel and lays a $100 bill on the desk and says he wants to inspect the rooms upstairs in order to pick one to spend the night.

As soon as the man walks upstairs, the owner grabs the bill and runs next door to pay his debt to the butcher.

The butcher takes the $100 and runs down the street to retire his debt to the pig farmer.

The pig farmer takes the $100 and heads off to pay his bill at the supplier of feed and fuel.

The guy at the Farmer's Co-op takes the $100 and runs to pay his debt to the local prostitute, who has also been facing hard times and has had to offer her "services" on credit.

The hooker rushes to the hotel and pays off her room bill with the hotel owner.

The hotel proprietor then places the $100 back on the counter.

At that moment the traveler comes down the stairs, picks up the $100 bill, states that the rooms are not satisfactory, pockets the money, and leaves town.

However, the whole town is now out of debt and looks to the future with a lot more optimism.

And that, ladies and gentlemen, is how the United States Government is conducting business today.

Sad but true. And if one link in that chain of events breaks, there would be trouble. Next joke:

The teacher says, "Whoever answers the questions I ask first and correctly can leave early today."

Little Johnny says to himself, "Good, I want to get outta here. I'm smart and will answer the question".

The teacher asked, "Who said 'Four Score and Seven Years Ago'?"

Before Johnny could open his mouth, Susie said, "Abraham Lincoln".

The teacher said, "That's right Susie. You can go".

The teacher said, "That's right Mary. You can go".

Johnny was even MADDER than before. Mary answered first.

The teacher asked, "Who said 'Ask not, what your country can do for you'?"

Before Johnny could open his mouth, Nancy said, "John Kennedy".

The teacher said, "That's right Nancy. You can go".

Johnny was BOILING MAD by now that Nancy answered first.

Then the teacher turned her back, and Johnny said,

"I wish these bitches would keep their mouths shut".

The teacher spun around and said, "WHO SAID THAT?" 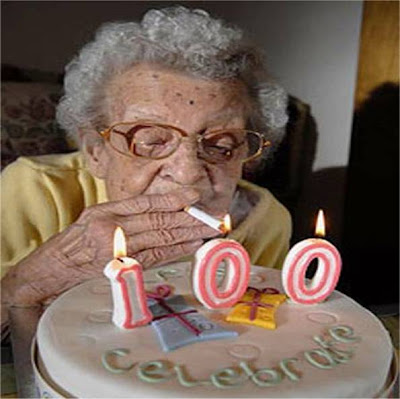 I've sure gotten old! I've had two bypass surgeries,
a hip replacement,
New knees, fought prostate cancer and diabetes
I'm half blind,
Can't hear anything quieter than a jet engine,
Take 40 different medications that
Make me dizzy, winded, and subject to blackouts.
Have bouts with dementia ..
Have poor circulation;
Hardly feel my hands and feet anymore.
Can't remember if I'm 89 or 98.
Have lost all my friends. But, thank God,
I still have my driver's license.

I laughed at this, but it also reminded me of something.

I have a very dear aunt, who is in her 80's. She had always been an excellent driver. But one day, she found herself driving the wrong way on a one way street, towards an oncoming truck. She avoided the accident, but she had no recollection of how she got in that situation.

It was the first time something like that happened to her, and she made up her mind it would be the last. She voluntarily surrendered her drivers license. It was hard for her to do, because she loved to drive, but she's also a very sensible lady. She also didn't want to put anyone else's life at risk.

The family are all glad because we want to keep her around as long as possible, God bless her.