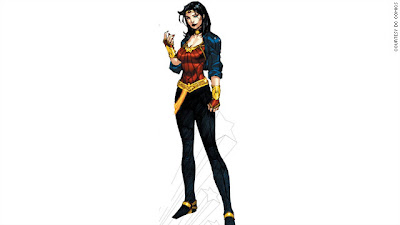 [...] "She's been locked into pretty much the exact same outfit since her debut in 1941," Straczynski said. "If you're going to make a statement about bringing Wonder Woman into the 21st century, you need to be bold and you need to make it visual. I wanted to toughen her up, and give her a modern sensibility."

And besides, he added, "What woman only wears only one outfit for 60-plus years?"

Does she look a bit like a grungy Vampire, or is it just me? Or is she a heroine on heroin? Whatever. I guess an update was called for. 21st century, and all that. No offense meant to the artist, it's not a bad design. Maybe she just needs to wash her hair. I'm probably too nostalgic.

They are also updating the Wonder Woman story/myth. Follow the link for all the details.