I've discovered "aTunes", and it's good!

It's a cross-platform music player and manager: 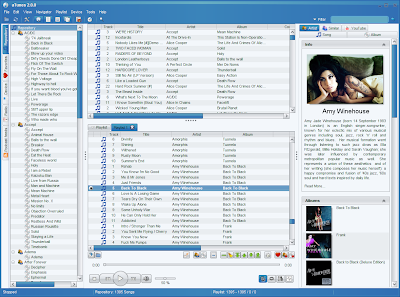 aTunes is a full-featured audio player and manager, developed in Java programming language, so it can be executed on different platforms: Windows, Linux and Unix-like systems, ...

I discovered it when I downloaded it from a Linux repository. One of my favorite features is, that it finds the lyrics to the song you are playing, and displays them in the sidebar.

I've since downloaded the Windows version too. Here is a review of aTunes from CNET:

When we tested aTunes, the fast installation was followed by shockingly sluggish tree navigation, required to add our song library. Fortunately, the subsequent scan was flawless, handling 7,500 tracks in about 10 minutes. So in music terms, the show started off with some bad feedback, but then aTunes really got rockin'.

The tabbed interface keeps the various panes from getting too cluttered, managing both primary and secondary information elegantly. Icons just below the Menubar let users hide the AudioScrobbler, the Navigator, and the Song properties windows, which makes the UI far more customizable than it might seem. The impressively useful AudioScrobbler pane surfaces nearly all secondary song information, making it easier to discover an artist's biographical details, using tabs to prevent clutter and keep track lists and song lyrics organized. Built-in links encourage discovery of similar songs and related videos on YouTube. [...]

It does go on to say there is room for improvement, but the review is also from two years ago; it's worth noting that there have been updates since then, the most recent was in June 2010. It suits my needs well.