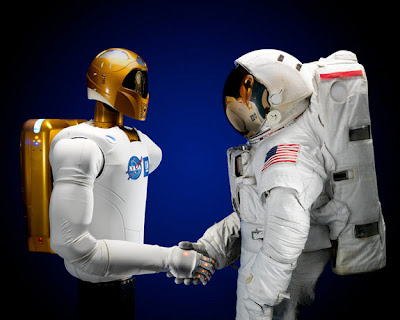 [...] Robonaut 2, which will become the first humanoid robot in space, looks a bit like a boxer's training aid.

The $2.5 million space bot consists of a head and torso, along with a pair of dexterous arms that pack down into a puncher's pose. R2 stands 3 feet, 4 inches (1.01 meter) tall and weighs about 330 pounds (150 kilograms).

R2 is a joint project of NASA and carmaker General Motors. It's the product of a cooperative agreement to develop a robotic assistant that can work alongside humans, whether they're astronauts in space or workers at GM plants here on Earth, NASA officials have said.

The bot is made primarily of aluminum and steel. Its head houses five cameras — including one infrared camera in the mouth — to provide stereo vision and depth perception. The torso contains 38 PowerPC processors, and R2 carries a backpack that can be filled with batteries or a power conversion system.

Each of R2's arms can carry about 20 pounds (9.1 kg), and its hands have articulating fingers and thumbs. The robot, which builds on NASA's work with its first Robonaut project, should be able to use the same tools astronauts on the space station use, agency officials said.

Astronauts will install Robonaut 2 inside the station's U.S. Destiny laboratory and put it through some test paces. The goal is to see just what the robot helper can do — how it can work side-by-side with astronauts to make station operations run more smoothly.

"We're going to use Robonaut on orbit to learn more about how robots can take over astronaut tasks — some mundane things and then potentially some of the more dangerous tasks," said Scott Higginbotham, payload manager for Discovery's STS-133 mission.

Robonaut 2 was designed to use both internal and external interfaces, so future bots could eventually be installed on the station's exterior to aid in spacewalks and other difficult or dangerous tasks. However, R2 itself will likely stay inside, officials said, since the bot lacks protection against the extreme cold of space. [...]

It really sounds more like an experiment, than a "Butler". I'm sure we will be hearing more about it as the experiment progresses.

Source SPACE.com: All about our solar system, outer space and exploration

Who knows what applications may be found for the robot in the future:

That's a great link Max, and some other interesting pics via the links there too, thanks for posting it.