Excitability, due to solar activity? I had previously posted about this last May. But with the recent increase in solar activity as we enter our Solar Maximum, I can't help but think of the Middle East. Compare what Tchijevsky said, and what is happening there now:

A. L. Tchijevsky’s Theory of Sunspot Activity and Human Activity

[...] That sunspot cycle activity increased and decreased in a cycle of approximately 11 years was established in the 1750s when astronomers began to make the first charts of the numbers of sunspots over time. During World War I, A. L. Tchijevsky, a Russian professor of Astronomy and Biological Physics who continued his studies at the war front, noticed that particularly severe battles regularly followed each solar flare during the sunspot peak period of 1916-17.

To test his hypothesis that sunspot cycle influenced human activity, Tchijevsky constructed an Index of Mass Human Excitability covering each year form 500 BC to 1922 AD. He then investigated the histories of 72 countries during that period, noting signs of human unrest such as wars, revolutions, riots, expeditions and migrations, plus the numbers of humans involved.

Tchijevsky found that fully 80% of the most significant events occurred during the 5 years of maximum sunspot activity. (Tchijevsky's merely noting that the 1917 Russian Revolution occurred during the height of the sunspot cycle earned him almost 30 years in Soviet prisons because his theory challenged Marxist dialectics.)

Tchijevsky did not believe solar disturbances caused discontent as much as they acted as detonators that set off the smoldering discontent of the masses--discontent often channeled into war by their rulers. Nor did he deny that even during minimum solar activity some people would rebel against intolerable conditions or that nations would seek advantage through war and conquest. Some have since noted that the number of sunspots during any period may not be as significant as whether there is a rapid increase in the numbers, triggering unexpected passions. [...]

In terms of solar activity, we are in a "period 3" now. Sunspot activity has been steadily increasing. Recently, we've had an X-class solar flare, with a coronal mass ejection. Does that count as a "sudden increase"?

The National Oceanic and Atmospheric Administration (NOAA) reports that the most energetic solar flare in four years occurred on February 15, 2011. This X2 class solar flare also produced a coronal mass ejection which will increase the likelihood of aurora borealis activity, also known as the northern lights, on the night of February 17/18.

The solar flare originated from Sunspot 1158. X class solar flares are the most energetic solar flares. Flares also have sub classifications represented by numbers from 1 to 9, with the larger numbers representing more energetic flares. This X2 flare is energetic but near the lower end of X class flares.

This flare also produced a coronal mass ejection (CME) which is likely to strike Earth on February 18 (UTC date). During a CME the Sun spews out charged particles which can interact with Earth's magnetic field to cause aurora. The most likely night to see aurora activity (northern or southern lights) from this solar flare is the night of February 17/18, but it is also possible on the night of February 16/17. 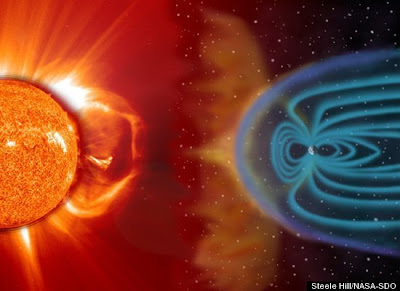 This illustration shows how Earth's magnetosphere deflects, for the
most part, a magnetic cloud of plasma from a coronal mass ejection.

It goes on to predict continuing activity from this sunspot.

I know that scientifically, there is insufficient data to prove any connection with political unrest in the Middle East. But still, I think it's "interesting" none the less.

But even if one considers that people are affected by solar activity, is the affect necessarily a negative one? Other research has shown that the peaks of solar activity have also been times of great advancement in human endevors, such as the arts and sciences:

[...] In another historical study Suitbert Ertel writes in his article “Synchronous Bursts of Activity in Independent Cultures; Evidence for Extraterrestrial Connections” that evidence has been reported suggesting a link between historical oscillations of scientific creativity and solar cyclic variation. Eddy’s discovery of abnormal secular periods of solar inactivity (Maunders minimum type) offered the opportunity to put the present hypothesis to a crucial test. Using time series of flourish years of creators in science, literature, and painting (A.D. 600-1800) It was found as expected:

2. during periods of extended solar excursions, bursts of creativity in painting, literature, and science succeeded one another with lags of about 10-15 years;

3. The reported regularities of cultural output are prominent throughout with eminent creators. They decrease with ordinary professionals. The hypothesized extraterrestrial connection of human culture has thus been strengthened.

The evidence seems to show that during the maxima of sunspot activity human behavior is stimulated. [...]

Could it be that, solar maximums don't stimulate people in ways that make them agitated, but rather, they stimulate human creativity, causing people to strive for improvement. But in places where that creativity is stifled and repressed, where their creative energy has no creative outlet, no chance of improvement, that energy would then be directed to removing obstacles to the manifestation of that creativity and improvement? It's an interesting idea.

You write: "Could it be that, solar maximums don't stimulate people in ways that make them agitated, but rather, they stimulate human creativity, causing people to strive for improvement." It stimulates different people differently, but the desire to be free of past constraints certainly is a big part of it. That unleashes stifled drives to create.

Since I got my Ham Radio license, I've been watching solar weather a lot more than I used to.

I noticed that during the most intense week of the Egyptian protests, the number of sunspots rapidly increased, just about doubled. Then the solar flare as well.

I had some doubts when I first read this, but after recent events I admit to having fewer now!

There's going to be a lot more solar activity coming up, and we all have front row seats. I think it's certain not to be boring.

Thanks for posting Carol. I look forward to reading your updates.

The Testosterone Hypothesis
How Hormones Regulate the Life Cycles of Civilization