A Government "In Drag"

Our government might be a drag, but a least they don't do drag:

Why Did Burma's Leader Appear on TV in Women's Clothes?

General Than Shwe of Burma, the dour and taciturn leader of one of the world's most repressive military regimes, isn't known for his feminine side. His contempt for pro-democracy leader Aung San Suu Kyi is rooted in part, most Burma analysts say, to the fact that she is a woman.

And so many Burmese were baffled earlier this month when Than Shwe and other top generals, appearing at a nationally televised ceremony, shed their dress uniforms for the Burmese equivalent of women's dresses. "I don't understand why the generals were wearing women's [sarongs] but they looked very weird," said a Rangoon mechanic, Myint Oo. Others put a more sinister spin on the generals' sartorial selection. "It's yadaya," said a Rangoon-based astrologer who asked not to be named, referring to Burma's particular brand of black magic.

Burma has had three rulers during the past half-century and all have been devotees of yadaya. Gen. Ne Win, who ruled from 1962 to 1988 reportedly shot his own reflection in a mirror, on the advice of a fortune teller, to foil a foretold assassination attempt. His obsession with numerology led him to demonetize all bank notes in 1987 so new notes could be printed - all divisible by his lucky number nine. The move wiped out the savings of most Burmese and contributed to an uprising one year later. His successor, Gen. Saw Muang, was replaced after erratic behavior that included a rambling, semi-coherent nationally televised speech brimming with references to magic and astrology. The man who replaced him, Than Shwe, is reported to have seven personal astrologers, several of whom are tasked with focusing solely on Aung San Suu Kyi, according to his biographer Ben Rogers.

According to Wai Moe, a journalist with the Irrawaddy, an online magazine run by Burmese exiles, two interpretations of the the general sporting a ladies' sarong have gained the most currency. The first is that astrologers have predicted a woman will rule Burma, and so by donning women's clothes, Than Shwe and the other generals are attempting to fulfill the prophecy through some superstitious sleight of hand. The second, fuzzier interpretation, is that by dressing in women's clothing, the generals are somehow trying to neutralize Suu Kyi's power. After Than Shwe brutally suppressed an uprising led by Burmese monks in 2007, anti-regime activists launched a campaign asking people to send women's underwear to the leader because they said the generals believe that contact with women's underwear will sap their power. By wearing sarongs, they may believe they are cancelling out Suu Kyi's ability to sap what they view as the virile male power that underpins their leadership. [...]

Gosh. No matter how fed up I get with our government, it's good to be reminded that you don't have to to look very far to find something worse. Even if it's superstitious men in drag: 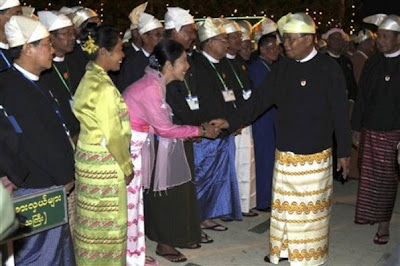 Than Shwe Skirts the Issue

The sight of junta supremo Snr-Gen Than Shwe and his close aides on national TV dressed in women's longyis at a state dinner in Naypyidaw has become the talk of the town in Burma and the brunt of many an unkind joke.

Marking the 64th anniversary of Union Day on Feb. 12 in Naypyidaw, 78-year-old Than Shwe appeared at the event accompanied by other top military brass, including: junta No.2 Vice Snr-Gen Maung Aye; No.3, the new Lower House speaker ex-Gen Shwe Mann; Prime Minister and President-in-waiting ex Gen Thein Sein; No. 4 ex-Gen Tin Aung Myint Oo who is vice-president-in-waiting; and No. 5 ex Lt-Gen Tin Aye.

“When I saw the ruling generals in acheik on the news and in the papers, I was somewhat intrigued as to why they were dressed as women,” said a 22-year-old female engineering student in Rangoon. “I have one—the same style and colors as the longyi worn by Than Shwe.”

In footage of the ceremony, Than Shwe greeted women members of parliament. All the officials in the scene wore the same ceremonial dress, although in a variety of colors. However, a general staff officer from the War Office, Brig-Gen Soe Shein, several male MPs and the retinue's bodyguards are shown in traditional male attire.

“They [the generals] know and must know that these acheik were designed for women,” said a senior journalist in Rangoon. “But they wore them nevertheless. We all know this is yadaya to counter the influence of The Lady [Aung San Suu Kyi] and to reverse her karma.”

Many fortunetellers have predicted that a woman will rule Burma one day, and so the generals’ fortune-tellers have advised them to dress as women, he added.

Or ironically, perhaps the people of Burma will now choose a woman ruler, 'cause they figure if they have to look at a leader in a dress, they may as well have a leader that looks good in one.