Perhaps not yet. And hopefully, not at all. But can the youth hang on to it? 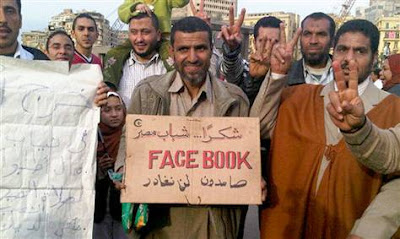 Is it really the internet, things like Facebook, Twitter and Google, that sparked the revolution? And is it now being usurped by others? Many of the younger Egyptians seem to think so:

CAIRO – A young leader of Egypt's anti-government protesters, newly released from detention, joined a massive crowd in Cairo's Tahrir Square for the first time Tuesday and was greeted with cheers, whistling and thunderous applause when he declared: "We will not abandon our demand and that is the departure of the regime."

Many in the crowd said they were inspired by Wael Ghonim, the 30-year-old Google Inc. marketing manager who was a key organizer of the online campaign that sparked the first protest on Jan. 25 to demand the ouster of President Hosni Mubarak. Straight from his release from 12 days of detention, Ghonim gave an emotionally charged television interview Monday night where he sobbed over those who have been killed in two weeks of clashes.

He arrived in the square when it was packed shoulder-to-shoulder, a crowd comparable in size to the biggest demonstration so far that drew a quarter-million people. He spoke softly and briefly to the huge crowd from a stage and began by offering his condolences to the families of those killed.

"I'm not a hero but those who were martyred are the heroes," he said, breaking into a chant of "Mubarak leave, leave." When he finished, the crowd erupted in cheering, whistling and deafening applause.

Ghonim has emerged as a rallying point for protesters, who reject a group of traditional Egyptian opposition groups that have met with the government amid the most sweeping concessions the regime has made in its three decades in power.

Protesters have lacked a clear, representative voice and many worry the traditional parties are trying to hijack the uprising, which began when activists used the Internet to mobilize protester. The mostly youthful protesters are insisting that no concessions will do unless Mubarak steps down.

In his first television interview Monday night, Ghonim dubbed the protests "the revolution of the youth of the Internet" and proclaimed defiantly: "We are not traitors."

About 130,000 people have joined a Facebook group nominating Ghonim as the spokesman of their uprising. The page is called "I delegate Wael Ghonim to speak in the name of Egypt's revolutionaries." [...]

Not only is this story not over yet, it's clearly just beginning. Where it's going, I don't think anyone knows for sure. The Facebook youth may have opened the door, but is it creating the "void" that Hillary Clinton warned about, where whoever has the most brute force on the ground can rush in and seize power? Can that be prevented?

And while the internet certainly is playing a role, I believe the actual spark has more to do with economics:

The Economic Roots Of the Revolt
Few countries have been less integrated into the global economy than Egypt.

The mass movement engulfing Egypt exposes a fact that has been hiding in plain sight: In a decade during which China has brought more people out of poverty at a faster rate than ever in human history, in a period of time where economic reform has been sweeping the world from Brazil to Indonesia, Egypt has missed out.

A decade ago, IBM ran a series of commercials featuring its global reach. One included a fisherman sailing on the Nile, tapping into a wireless network. It was an enticing image—and almost completely fictional. Few countries have been less integrated into the global economy.

The country ranks 137 in the world in per-capita income (just behind Tonga and ahead of Kirbati), with a population in the top 20. And while GDP growth for the past few years has been respectable, averaging 4%-5% save for 2009 (when all countries suffered), even that is at best middle of the pack in a period where the more competitive dynamic nations have been surging ahead.

Egypt has long been famous for crony inefficiency. Yet Hosni Mubarak was graced with nearly $2 billion in annual U.S. aid, another $5 billion from dues from the Suez Canal, and $10 billion in tourism, so he could buy off a considerable portion of the 80 million Egyptians. [...]

It goes on into a lot of detail. While some of the problems are unique to Egypt, others are endemic to the region.

Many countries of the Middle East are borrowing money to keep food prices down, instead of creating jobs. Like the Western nations, they are also accumulating massive debts. It's an unsustainable situation. Where is it going to lead to?