About Chickens coming home to roost... 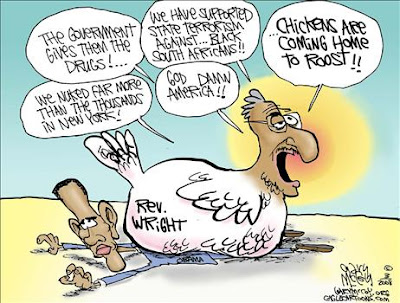 There's been a lot of talk about Obama's chickens coming home. But are they? If so, how many? While the gallup poll shows a dip for Obama, it's not big.

I can remember a time when something like this would have sunk a politician pretty quickly. It may yet sink Obama, but it sure isn't happening quickly, which makes me wonder if it will happen at all. How many Americans think like Obama, or have other reasons to support him regardless? From Gallup.com:

This is the first time Clinton has held a statistically significant lead in over a month. She last led Obama in Feb. 7-9 polling, just after the Super Tuesday primaries. Since then, the two candidates have usually been in a statistical tie, but Obama has held a lead in several of the polls, most recently in March 11-13 polling.

Obama's campaign has been plagued by controversial remarks made by his former pastor, Rev. Jeremiah Wright. Obama delivered a major speech on race Tuesday to try to move beyond the controversy. The initial indications are that the speech has not halted Clinton's gaining momentum, as she led by a similar margin in Tuesday night's polling as compared to Monday night's polling.

To see more about McCain's lead, you can follow the link for more graphs and details. This is good news for Republicans, but it's still early in the race, and no one can assume anything at this point.

In Obama's speech yesterday, he threw his grandmother under the bus, and then insisted he must not completely distance himself from Jeremiah Wright, defending the racist demogogue, even though Obama himself has insisted that other candidates disassociate themselves completely from people who have been accused of being racist. It would seem that Obama believes that only white people can be racist.

It doesn't make a lot of sense in my world, but for many people, it apparently does. Is Political Correctness trumping common sense? Let's hope not.

As for chicken's coming home to roost... for years I've listened to leftists like Jeremiah Wright preach that 9-11 was America's chicken's coming home to roost, because we DESERVED it. I see it a little differently. I think it WAS our chickens coming home, but not because we deserved it. These chickens were about our weakness and unwillingness to defend ourselves and hold our ground, which had consequences. Jimmy Carter opened the door for this, and for decades since Islamists have been launching attacks on us, which we have repeatedly ignored. Each time we failed to respond, it encouraged them to think we were weak and to try harder with each new attack, right up to 9-11.

Since the crusades centuries ago, the Western world has staved off attacks by Muslim Extremists by being strong. Militant Islamists have only returned to attacking us now because they see us as weak and vulnerable, unwilling to fight.

It's a war whether we want it or not. I know which side I'm on, and it's not the side of leftist's like Wright or the Democrats who support him.

Steele on Obama: The Great "Bargainer"