Below is an artists rendition of the new Canadian robot arm that the current shuttle mission will install on the ISS. They will also be installing a storage unit and other components of the Japanese Kibo lab, with the main part of the lab to follow on the next mission launch in May. 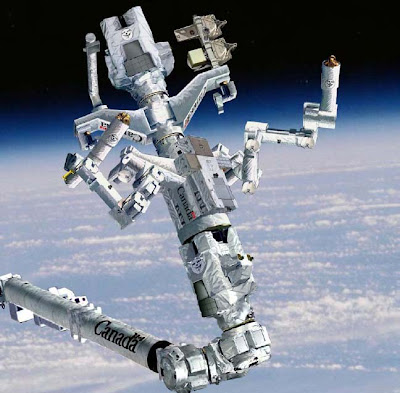 The Kibo lab will be the largest science lab on the station. The following is a description of the current mission from NASA (note that it was published prior to the mission, so it talks about it in the future tense):

All Aboard for STS-123: The Station Goes Global

“This is the first flight where we actually have all the partners,” said Dana Weigel, the lead station flight director. “It’s not just ‘a Japanese flight,’ or ‘a Canadian flight.’ This flight truly is the first time that it requires every single partner actively participating to make everything work. I think that’s a great milestone.”

Topping the list of milestones is the delivery of part of the Japan Aerospace Exploration Agency’s module, marking the beginning of the agency’s presence on the station. The Japanese Experiment Logistics Module, Pressurized Section – called the JLP – is really just the warm-up act for JAXA. It will contain critical avionics and serve as a storage area for experiment materials. At 14.4 feet in diameter and 12.8 feet in length, it is the smaller of two pressurized Japanese modules. Combined with other elements, they will make up Kibo, the station’s Japanese complex, named for the Japanese word for hope. Kibo’s main facility and its robotic arm are scheduled to launch on the following shuttle mission, and a "front porch" that will allow astronauts to expose experiments directly to space will be delivered later.

But small or not, what the module represents is big.[...]

They mention the Robot arm as going up in a following launch, but it's actually gone up on this flight. Assembling the robot will be part of their mission. Below are the astronauts of the Endeavour crew: 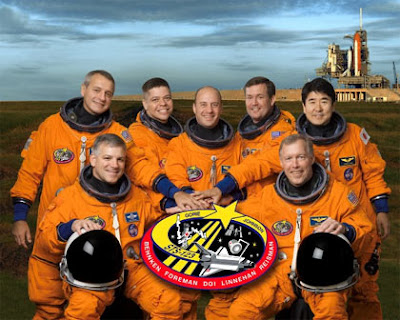 This mission will be the longest mission for a shuttle flight crew to date, scheduled to last a minimum of 16 days. You can track the latest news on the Mission's progress here:

Last time I looked, they had unloaded the Dextre robot for assembly, but were having some power supply issues with the platform it's to be assembled on. 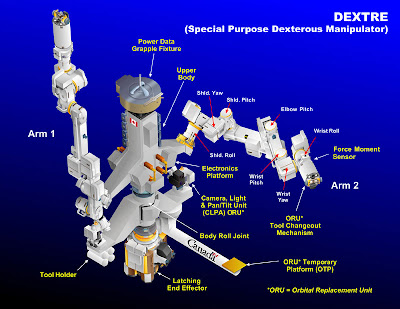 You can read more about Dextre here:

'Dextre' Ready for Space Station Duty
It has some great links, including a link to a video about Dextre and Kibo.

[...] The two-armed, $200-million robot is tentatively scheduled to be launched March 11 on board space shuttle Endeavour.

Daniel Rey, head of the technical team preparing Dextre, says the robot will reduce the amount of time astronauts must spend outside the space station. The robot could eliminate the need for up to a dozen spacewalks a year.

"He will free up astronauts so they can do more science and more research rather than maintenance,'' said Rey, who has worked on the Canadian Space Agency project for 10 years.

"It's easy to imagine from a half-a-dozen to a dozen sorties will be avoidable now,'' Rey said in an interview.

Dextre, short for Special Purpose Dexterous Manipulator, will perform exterior construction and tasks like changing batteries and handling experiments outside the space station.

Dextre also comes equipped with a tool holster which allows the robot to change equipment as needed "like any good handyman.''

"He doesn't have an artificial intelligence. . .he can be remote controlled from the ground or from the space station.''

The astronauts who will operate the robot's rotating joints, torso and five cameras have already been trained at the space agency, just outside Montreal.

Dextre is the third and final component of the mobile servicing system developed by Canada for the space station.

It can either be attached to a mobile base which runs on rails along the exterior of the station or it can be connected to Canadarm2 like a snap-on tool.

The robot, which has a 15-year lifespan, will be installed during three of the five spacewalks planned in March. [...]

Fascinating. You can read the whole article for more details.
Posted by Chas at 1:14 PM