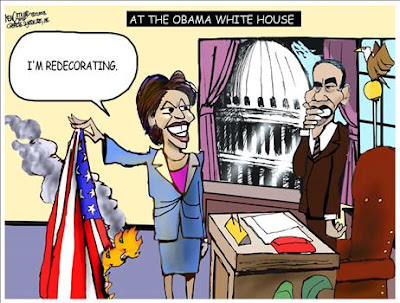 [...] What can you say about such rank contemptuous hypocrisy? It is, as I mentioned regarding her "no respect for America" speech, not just the Obamas who think this way, it is part and parcel of the entire Democrat/Leftist mindset.

Indeed. The Democrat party these days seems to THRIVE on envy, resentment and a permanent victim hood mentality. No matter how much they have, it's never enough, no matter how much they get their way, it's not good enough. They constantly go on about what they are against, but they are seldom FOR anything, other than taking away earned income and liberty from others. The whole party is based on a dynamic of negativity that needs to be continually fed and maintained, and thus creates nothing positive.

No wonder Mrs Obama thinks America is mean. She's an ungrateful bitch and ungrateful people can never be happy no matter how much they have. [...]

Visit the links above for quotes by her, she sure likes to complain, and seems to have a decidedly negative view of America. I've never known a socialist who was grateful, in fact they all seem quite the opposite; ungrateful, envious and resentful. Is that what we need in the Whitehouse? I think we could do better.