Where does Obama get his foreign policy advice? It's a good question.

This first article from A. Millar at the Brussels Journal is about our worsening relations with Great Britan, and how the US no longer considers them to be our top ally, but now looks to Germany and France instead. It's worth reading for the reasons why relations have soured:

Are Britons Planning to Attack the U.S.?

They of course are not planning to attack the US, but they may be overly sympathetic and too gentle with those who are trying to. Read the full article for the disturbing details. But interestingly the last part of the article mentions Barack Obama and Briton's Labour party, which is a big part of the problem. Although Obama apparently doesn't think so:

[...] However, in marked contrast to the Bush administration, Obama – who probably views Britain as America’s quant little cousin across the sea – seems likely to try to build a better relationship with Britain, should he become president. He has already met Britain’s Junior Education Minister, David Lammy (heralded as Britain’s own Obama), though much to the surprise of the rest of the British government, which was apparently deliberately kept in the dark about their meeting.

But Obama would be advised to tread very carefully when it comes to cosying up to Labour, which has not only allowed Islamic extremism to grow, and Islam to become a powerful voice in politics, but which is also quite willing to “commend” the U.S.’s long-time adversaries. Notably about a week ago an early morning motion was made in the House of Commons, praising Fidel Castro, condemning the U.S., and urging the British government to, “resist the aggressive forces within the US Administration…” You may note, the sentiment is eerily similar to statements normally issuing the Iranian government.

Obama seems to side with foreign leftists on how America should be. He certainly has their support. From Briton's Daily Mail newspaper: 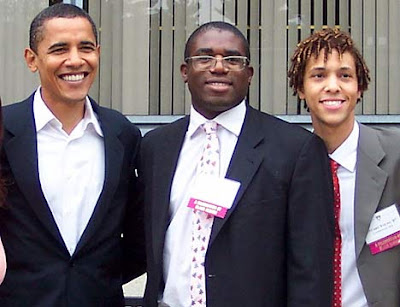 An ambitious minister once tipped to be Britain's first black Prime Minister is being blamed for sparking a diplomatic row over the US Presidential election.

Senior Foreign Office officials claim David Lammy, hailed by some as "a British Obama", is linked to furiously denied reports last week of panic in Downing Street over the prospect of Barack Obama beating Hillary Clinton.

The reports coincided with junior education minister Mr Lammy, 35, joining Mr Obama on his campaign trail for the Democratic nomination – a trip which neither the British Embassy nor Mr Lammy's own department knew about.

It was a private visit but eyebrows were raised in Whitehall because of the unwritten rule that Ministers should not endorse candidates in foreign elections. [...]

While there is nothing illegal about the visit, it has ruffled some diplomatic feathers in Briton. And it's always worth noting who a candidate meets with.

More interesting still, is who Obama seeks foreign policy advice from closer to home. Would you believe, an Irish journalist: 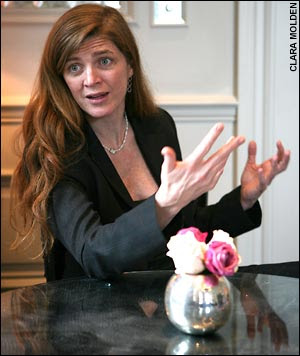 Barack Obama 'will repair image of US in UK'

[...] Miss Power is the self proclaimed "genocide chick", who won the Pulitzer Prize for her reporting from Bosnia.

She plays basketball with George Clooney and is the inspiration for the latest David Hare play.

This auburn haired Irish journalist is a professor at Harvard, the founder of a human rights think tank and was cited by Men's Vogue as one of the most beautiful women in the world.

She is also one of Mr Obama's most trusted advisers on foreign policy.

The would-be President of the United States texts her with, "It's Obama, call me" in the middle of the night. Sir Nigel Sheinwald, the British Ambassador to Washington has already called on her three times.

In America, Miss Power has been compared to Condoleeza Rice.

"I'm nothing like her," she says. "I don't have any conventional political ambition."

But if Mr Obama wins the Presidential race she is likely to remain a powerful force. "I'd do anything he asked me to do. It's not about working for the next President of the United States, it's Obama. If he ran General Motors I'd be working for him."

Sounds like she has a serious case of Obamamania. Her views are the typical leftist anti-American views that are so chic in Europe. I don't doubt Obama shares those views. Obama can certainly seek his advice from wherever he likes, but I have to say I would prefer a president with American views and values, instead of European ones.