A new book: "Islam for Pigs, Apes, Mules and Other Beasts: 250 Questions about Islam"

In response to the controversy over a movie about Muslims that is soon to be aired in Holland, an author renames the title of his upcomming book about Islam to ride the wave of controversy. Elaib Harvey at the Brussels Journal reports:

Reported via the Dutch blog Klein Verzet is the story of Professor Hans Jansen who seems to have put the cat amongst the pigeons by renaming his forthcoming book “Reading the Koran for Unbelievers.” In the light of the Dutch Government's panic about Fitna, the film made by Geert Wilders, it appears that he has changed the name to, “Islam for Pigs, Apes, Mules and Other Beasts: 250 Questions about Islam.”

Now Professor Jansen seems to be pretty serious about his work, and currently holds his tenure at Utrecht University, his CV seems kosher, [...]

Interesting. The full article has some excerpts from the book.


Another interesting article by Tiberge at the Brussel's Journal has a look at the growing Islamic population of France: 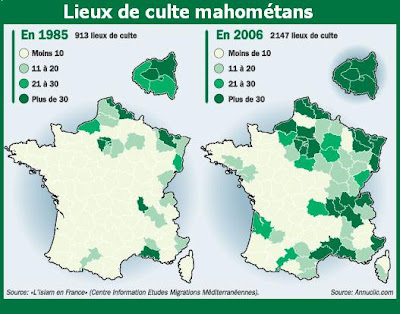 The Islamification of France

The article has another graphic, and a link to a large listing of Mosques in France. This news isn't new, but I like graphs and maps.
Posted by Chas at 9:33 AM