This one is manufactured by the same factory (Quanta) that builds the OLPC project's XO laptop computer. It's built for a company called Norhtec, which has been making low cost micro PCs for some years now. The laptop is called the "Gecko". An excerpt from Linux Devices: 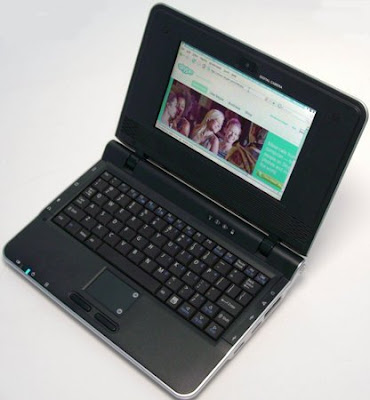 [...] The Gecko resembles several other newly launched sub-notebooks, including the Everex Cloudbook and the Asus EEE PC. Like the EEE PC, but unlike the Cloudbook, the Gecko runs a Linux OS that is actually tailored for use on small-screen displays, and it has a fairly conventional laptop trackpad.

Norhtec's MicroClient Jr.
Bangkok-based Norhtec has previously shipped several ultra low-cost Linux thin clients, including the MicroClient JrSX, as well as an earlier $100 PC called the MicroClient Jr., which runs Puppy Linux. The goal for the Gecko was to create a laptop affordable enough to sell in poorer nations, Barnes said. "We are bidding the laptop on several large developing country projects," he wrote.

Taiwanese manufacturer Quanta has some experience with laptops aimed at the developing world, having won the contract to produce One Laptop per Child's Linux-based XO-1 laptop. According to OLPC, XO-1 laptops started shipping in November, and they continue to roll out around the world, albeit at a slower pace than expected. Meanwhile Intel is selling a rival "developing-market" laptop called the ClassMate PC, and a nonprofit group called Literacy Bridge is working on a Linux-based laptop for developing markets that will serve as an audio library for a low-cost Talking Book audio player that is billed as a $5 iPod.

According to Barnes, the formal announcement for the Gecko Laptop will happen soon, and the laptop will sell for under $300. More information on Linpus Linux Lite can be found here.

It's not restricted to using Linpus, other operating systems, even Windows, can be installed on it. I think this machine will be another welcome entry in an expanding market niche. See the rest of the article for more photos and links.