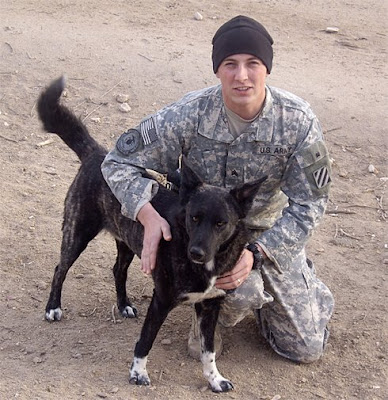 From Adam Silverman at USA TODAY:
Rescued from war: Tales of puppy love

CAMBRIDGE, Vt. — Cinnamon is a mixed-breed dog whose gaze, those who love her say, redefines the term puppy-dog eyes.

Navy officer Mark Feffer of Annapolis, Md., fell in love with Cinnamon during his first few days in Afghanistan. When Feffer's tour ended, he couldn't bear to leave Cinnamon behind.

The mission to bring the animal stateside — despite military regulations against doing so — almost ended when the puppy went missing, but after a frantic 44-day search across Afghanistan and Kyrgyzstan, the dog arrived safely in the USA.

Two years after the lieutenant commander in the U.S. Navy Reserve struggled to bring the red-furred pooch home, a program called Operation Baghdad Pups is easing the process for other servicemembers who want to bring stray dogs home when they leave Iraq or Afghanistan.

Launched in November, Operation Baghdad Pups, which operates under the umbrella of the Society for the Prevention of Cruelty to Animals (SPCA) International, has more than 30 dogs and several cats it is working to bring to the USA, program manager Terri Crisp says. The program fields two or three inquiries daily. [...]

I know that one could argue, "why bother to bring dogs and cats home from Iraq, when there are already plenty here stateside that need adoption?" But read the whole article. Read the story of "Cinnamon". 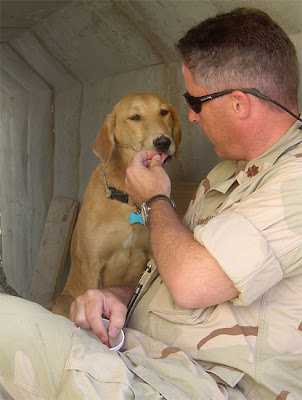 Our soldiers bond with the dogs they adopt while over there. They often want to bring them home, instead of abandoning them to starvation or something worse. If you have ever bonded with a dog, you will understand.

There is now an organization to help soldiers bring home their dogs:

www.baghdadpups.com
"No Buddy gets left behind"
If you care to make a donation, it's a way to help both our soldiers and stray dogs.
Posted by Chas at 10:49 AM