ISS is now about 70% completed

Here are some photos taken from the Shuttle Endeavour recently, when it departed the ISS: 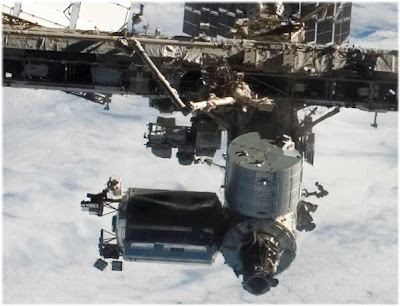 Above is a close-up of the Kibo lab storage unit, the circular canister on top, with the Columbia ESA lab protruding just to the left. The new robot arm is resting above. The Kibo storage unit is in a temporary location; it will eventually be moved and attached to the Kibo lab that is arriving on the next shuttle mission. 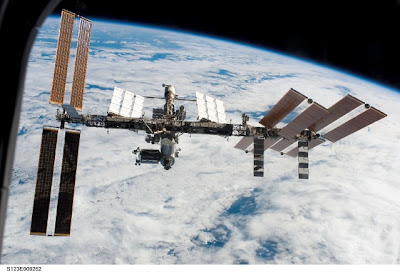 More than double the size of the ESA lab, the Japanese-made Kibo lab will be the largest laboratory on the station.It will be attached opposite the ESA lab on the right side, and the storage module will be moved on top of it. 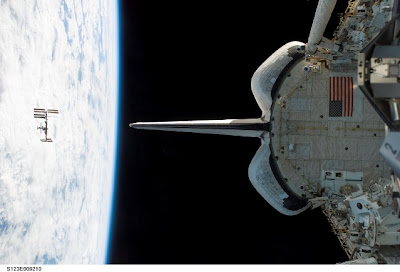 You can see lots more photos from Endeavor's mission in the galleries here:

The images are available in high and low resolution. The high resolution ones make great desktop wallpaper.

The next shuttle mission, STS-124, is scheduled for May 25th:

Navy Cmdr. Stephen G. Bowen was previously named to the STS-124 crew but has been reassigned to STS-126. The change allows room for the STS-124 mission to rotate a space station resident.

Astronaut Gregory E. Chamitoff is scheduled to fly to the station as a mission specialist on STS-124. He will take Astronaut Garrett E. Reisman's place as an Expedition 17 flight engineer and return to Earth on shuttle mission STS-126.

The STS-124 mission is the second of three flights that will launch components to complete the Kibo laboratory. The mission will include two spacewalks to install the new lab and its remote manipulator system. The lab's logistics module, which will have been installed in a temporary location during STS-123, will be attached to the new lab.

STS-124 is the 26th shuttle mission to the International Space Station.

You can follow the link to see photos and profiles of the crew members. There is a total of 10 more shuttle missions planned. If all goes well, the ISS will be completed by 2010, and NASA will retire the shuttles in favor of their new Orion capsules. Their focus will then change to manned missions to the moon, and Mars.