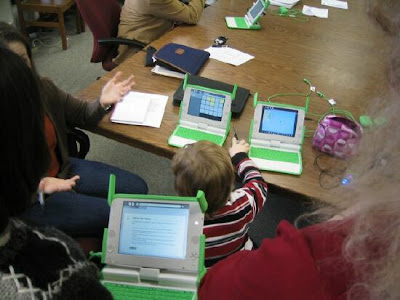 As the One Laptop Per Child project moves forward, kids seem to take to the computers quickly and with enthusiasm. Even very young kids. How about a 6 year old? From the blog Suburban (in)Sanity:

My six-year-old son, Liam, and I recently attended a One Laptop Per Child networking event at the Marie Murphy school in Wilmette, IL. The event was put on by Chris Brown as part of a teacher professional development day. He invited area XO owners to come talk about our computers as well as have the opportunity to network with others in the community. One blogged about it here.

About 10-15 laptops were present at peak. We gathered around a large conference table in the resource room and quickly got to work. Liam was beyond excited to have so many “friends” show up on his neighborhood view. [...]

The kid takes to it like a duck to water, and pretty soon, he is "demoing" his computer skills to a very receptive audience. Amazing.

I once had a look at the "Sugar" software operating system used on the OLPC computers. I hated it. Most adults do, because it's too different from what we know. It's made to appeal to children who have little or no experience with computers. Even very young children. And apparently, they DO find it appealing. The OLPC project is now expanding to include US schools, with Birmingham, Alabama being the first major project here.

I posted earlier about a 10 year old British boy whose journalist father gave him a OLPC computer, only to be amazed at what the kid could do with it, and how enthusiastic he was. As more and more children are exposed to this, it seems apparent that they are very receptive to it. I find that fascinating for a variety of reasons.

These kids I've posted about are part of a new wave that is just beginning. A wave of children who are being introduced to computers at a very early age. And not just rich kids in the classrooms of expensive schools, but kids from all backgrounds, everywhere.

Nothing like this has ever happened before, so we can't quite know what all the consequences will be. Like so many things, I expect there will be a mixture of good and bad. I'm not complaining about it. Even if there were a significant number of people who wanted to stop it or slow it down, I don't think it would be possible. A fully interconnected internet world is arriving now, where even children all over the planet will be able to talk to each other. It's happening NOW, right before our eyes.

In developing nations where the laptops are being used, the parents of children are asking their kids to look up stuff on the internet for them. By proxy, a whole bunch of new adults are being introduced to the internet. There is even talk now of designing a simple inexpensive laptop device like the OLPC XO, that's made for adults. This is a trend that could have big cultural effects world wide.

I love using computers. They can be very helpful tools. But they can be used for lots of other purposes as well, like entertainment and communications, a link to mass media and all the good and bad stuff that comes with it.

I remember as a kid, growing up in the 60's and 70's, listening to the old folks complain about Television being the "boob tube". They said watching too much television made people "stupid". Old folks back then remembered what life was like before the TV existed. Now many years laster, as I look at young kids and computers and the internet, I think I understand better what those old folks were seeing.

TV isn't reality. It's entertainment, fantasy. Sure sometimes it's educational or informative, but it has a large fantasy element. It isn't the REAL world, though it does interact with and claim to represent the real world, it is in so many ways, 2nd hand notions, 2nd hand experiences, unproven ideas and wild imaginings.

The same goes for the internet, but because it is interactive, perhaps it's even more so. Computers themselves are like extensions of our minds, or at least mind tools, as we interact with them so closely with our minds. Plug that into the mass media, the collective or race mind, and then spend too much time immersed in it and... I think you can lose touch with reality. You start living in a world of ideas and imagination, and stop seeing the world the way it really is, and stop seeing people the way they really are.

Our advanced Western culture is becoming so obsessed with electronics and multimedia, you would have to wonder how we will cope if an EMP pulse fries all of our electronics and we suddenly find ourselves living in a world with only the technology of the 1870's available to us? Would we understand enough about reality and the basics of living to survive?

I love computers and the internet, but I love reality too. I see computers and the internet as tools, and as entertainment to some degree. That's all for the good. I just think we have to be very careful not to lose ourselves in them, and thus our connection to reality. With children being indoctrinated into the computer lifestyle so early in life, I have to wonder if they will be able to even understand what I am talking about, much less why it is important.

10 Days without windows... The Machine Stops