What does the term "Conservative Republican" mean anymore? Can we all get along? SOON? 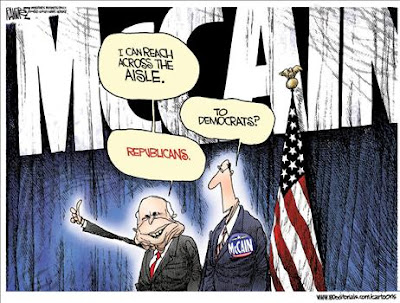 I love this cartoon because it cuts both ways. Conservatives would say it shows McCain is too liberal. But many moderate Republicans would say that some conservatives are so far right that they've left the Republican party, and now need to be "reached out" to. Me, I'm hoping John can reach BOTH ways.

Ronald Reagan did. He's now lauded as a "great conservative", but I remember when he was president, there were conservatives who complained he was too liberal. Reagan thought it was great if he got 80 percent of what he pushed for. Yet some on the far right continued to badger him to push for 100 percent.

Any politician who always gets 100 percent of what he wants has usually got a name like Mussolini or Hitler. 80 percent is pretty darn good. When you live in a democratic republic, you have to compromise, even when you hold a powerful position. And to even reach that powerful position, there has to be compromise and cooperation even within ones own party.

Reagan achieved his position by reaching out to conservatives. But not just Republican conservatives, but Democrat ones too, as well as moderates and independents. It was a true coalition, and it worked.

But that was 30 years ago. Times change, as do people. I'm hoping John McCain can also reach out to a wide range of voters and form a contemporary Republican Coalition, because we are going to need a big tent to win this one.

But this also begs a question: who ARE Republicans nowadays? What IS the definition of a conservative? Depending on who you talk to, you might get a very broad -or very narrow- answer.

I find this latest article from Gallup.com somewhat disturbing, but perhaps at the same time revealing:

Republicans Split on Whether Huckabee Should Drop Out

[...] The results show that there is no strong majority sentiment on the part of Republicans that Huckabee should leave the race. Forty-six percent say he should drop out, while 49% say he should continue.

According to media reports and many political observers, one of McCain's biggest challenges at this point is to woo the conservative wing of the Republican Party. It is not surprising, therefore, to find some differences by ideology in views of Huckabee's staying in the race.

Gallup Poll Daily election tracking data show that about a quarter of Republicans nationwide continue to support Huckabee. Another 5% support Ron Paul or Alan Keyes, and 9% volunteer the name of another candidate (such as Barack Obama, Hillary Clinton, or Mitt Romney) or don't have a choice. That currently leaves McCain with the support of about 6 in 10 Republicans nationwide.

In general, McCain's nomination support is lower among conservative Republicans, and higher among moderate Republicans. But the differences are perhaps not as large as might be expected given all of the attention to McCain's presumed problems with the conservative wing of his party. [...]

(bold emphasis mine) The poll also goes on to give graphs and figures giving a breakdown of people's church attendance, how often they attend, and who they support in the Republican primaries. It's interesting.

But the thing that keeps jumping out at me, if the Gallup poll data is to be trusted, is that 1/4 of Republicans are Huckabee supporters. Now to me, the only thing I see conservative about Huckabee supporters is their anti-abortion and anti-gay positions. In most other ways they seem like Big Government Nanny-State Democrats to me. If they are now 1/4 of the party, and the Republicans are supposed to be the "conservative" party, then what does that say about the present state of conservatism in America?

I've also been hearing it said that McCain wouldn't dare choose Huckabee as Veep, because "conservatives" wouldn't like it. Yet is seems that at least 1/4 of Republicans nationally would like it. And 54 percent of self-described conservative Republicans want Huckabee to continue running?

This just begs the question; if John McCain is going to form a coalition and pull the party together, what kind of coalition is it going to be? How will the 1/4 of Huckabee Republicans be accommodated? And what about other Republicans who don't like Huckabee but consider themselves to be conservatives of various kinds? What would this coalition look like, and how would it work?

To tell you the truth, I hope we find out... soon. I know a lot of folks are waiting to see who McCain picks as Veep before they will consider offering their support. Yet no matter who he picks, there are bound to be folks who will be dissatisfied. An effective coalition will need more than just a good Veep choice. Different segments of the coalition will want their particular concerns addressed, and that will have to be negotiated. Compromises will have to be made. Yet I believe it IS doable. I just hope it all starts to gel sooner rather than later. If conservatives only start to offer their support at the last minute like they did for Mitt Romney, it could end the same; too little, too late.

In a coalition, nobody gets 100 percent of what they want. But hopefully, we can all get what we NEED. If that happens, I'll be very happy.

Hey Chas - I just wanted to let you know that I included this post in a blog round-up on McCain Blogs.

We just started a new blogroll there and I hope you will consider joining. Its brand new but we think it will grow to be a sizable blogroll.

Its not in competition with the other blogrolls and groups for McCain - but hopefully to compliment them. We aren't wanting to compete with anyone but to just do our part to increase the McCain presence on the web.

If you're interested come on over and join. http://mccainblogs.com/

Like I said - its new but I think we are off to a pretty good start.

Either way .... we'll keep adding your posts to the blog round-ups.

Thank you for the link Beth.

I like the Masthead/logo of McCainblogs.com, very classy looking. I probably will join, the next time I edit my sidebar, probably sometime soon. Thanks for the info.