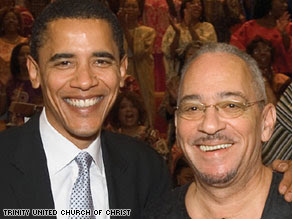 Barack Obama and his church's former pastor,
the Rev. Jeremiah Wright, in a 2005 photograph.

[...] Earlier Friday, before the announcement of Wright's departure from the Obama camp, the Illinois senator denounced some of the ministers's sermons, calling them "inflammatory and appalling."

And, even though he has been a member of Trinity United for the past 20 years, Obama said he had never witnessed Wright making such statements.

Still, Obama defended his 20-year relationship with Wright, saying that the pastor has served him in a spiritual role -- not a political one.

Obama and Wright have been close for years. Obama has been a member of Wright's church since his days in law school, and Obama's best-selling book, "The Audacity of Hope," takes its title from one of Wright's sermons. [...]

Read the whole thing, which includes some of the controversial statements... and the Obama camp's attempts at spin control.

It would seem we are being asked to believe that for 20 or so years, Obama attended a church with a pastor that espoused these views, was good friends with the pastor, but he didn't know about these views until he decided to run for president? It sounds like Bill Clinton saying he smoked a dubee, but he didn't inhale. Clinton had a problem with being truthful. Does Obama share this problem?

Which is more likely; Obama never personally heard the sermons, and passively disagreed with many of the Pastor's ideas, or: Obama knew about all this, but it didn't worry him much, because in the social circles they move in, such ideas are widely accepted and taken for granted, and therefore don't seem shocking or controversial?

People generally tend to attend churches that reflect their beliefs. That's the norm. William Teach sums it up nicely here:

OK, let me get this straight (as so many others have said, as well): Barack Mary Obama has been going willingly to Reverend Wright for 20 years. Wright married Barack Mary Obama and his wife Michelle “America is just mean”. Obama’s children were baptized by Wright. Obama’s kids go and listen to the hate speech of Wright. When Obama became a United States Senator, the Obama’s continued to go this same church of hate, blame America, demean America, say America created the HIV virus to kill Blacks, conspiracy theories, and segregation, among others. Obama continued to have Wright be not only a part of his families life, but his campaign. [...]

Teach goes on to suggest that if Obama really disagreed with Wright's ideas, why didn't he distance himself sooner, instead of inviting him to join his campaign? See the full article, for more information and links.

What I find really disturbing is, all of this should have come out in the mainstream press long ago. Can you imagine if a Republican candidate had attended a church for 20 years were the pastor said things like "God Damn America" and worse, that we would not hear about it in the press? I guess journalists don't ask questions and dig for information anymore... unless the candidate is a Republican.

Obama and His Racist, America-Hating "Pastor"

It's not about the pastor. Obama's THEOLOGY exposed = election lost. See:
http://miraclesdaily.blogspot.com/

Muslims Against Sharia call on Senators McCain and Obama to cut all ties with their racist, Islamophobic, and anti-Semitic supporters.

I like to know where is the great rev Al Sharpton and jesse Jackson at...If a white person says anything about blacks then they should be fired and Al sharpton is all over whiteys ass but a black person now a paster mind you spews hatred about white people and Al sharpton is ok with that...it will never change race is only one way whites can do no Wright to a black man and a poor poor black man can do no wrong. Rev Scum Wright should try reading the Bible

ACP,
I must say, you have an interpretation on ACIM that I've not heard before. LOL!

MAS,
I think politicians can accept endorsements from whomever they like... but they need to be honest about it, and take the consequences.

Anonymous,
There is a segment of the black population that wants to be able to complain and criticize as much as they want to, while being exempt from complaints and critcism themselves. It used to be know as "wanting to have your cake and eat it too."

In a common sense world that was understood to be childish and unreasonable. Political correctness tries to force us away from common sense, when in reality we really need to return to it.

"I think politicians can accept endorsements from whomever they like"

Really? Would you vote for Ron Paul who is endorsed by and/or accepted donations from every major Neonazi group?

I wouldn't vote for Ron Paul because I consider him to be a nutter. He can take money from whomever he likes... and the consequences that go with it.